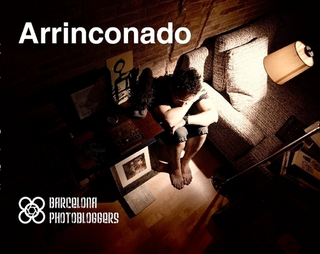 Arrinconado (Cornered)
by Barcelona Photobloggers
Project “Arrinconado” (Cornered) starts a new era for Barcelona Photobloggers. The objective was to create a collaborative project with a horizontal organization in which all of the members would have an opportunity to participate in every aspect of creation, from definition to production, and which would lead to a work authored by the group and not by a gathering of various authors in the same space. The path traveled during the year and a half of work presented a challenge, the most important part of which was the creative process itself, as well as the reflective experience and the exchange of ideas and methodologies.

Based on the short story by Santiago Ambao, chosen for its quality, its relationship to the city and the authors’ close relationship with the group, “Cornered” is a photo- novel with three main actors: Ismael, Nuria and the city of Barcelona.