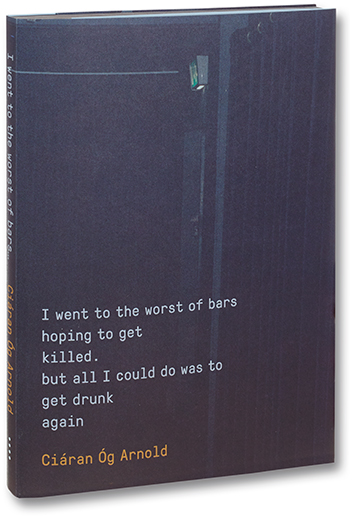 This is Ballinasloe, a sandstone town on the River Suck in the easternmost corner of Galway in Ireland, seen through the eyes of a native, Ciarán Óg Arnold. Within the rabble, Arnold trails after the cast-offs, invisible men who spend their time in murky corners, choosing to do nothing but drift and drink. Ballinasloe is a mouth; in Irish, mouth of the ford, mouth of the crowds. “We claim to hate it here”, writes Arnold, “but the truth is that we choose to stay, hiding from reality, drowning in drink and wanting to be left alone as we await whatever fate is in store.”

Over the years, Ballinasloe has become a ghost town, its immobile economy holding back only the indifferent. Its empty clubs are the ordinary voids of an orthodox escapism, the unvarying nightly vocation that is also creeping annihilation. The town is haunted by the absence of those unseeable others, who have also departed – the suicide kids of Charles Bukowski’s poem, from which the book’s title is taken.

Ciáran Óg Arnold (b. 1977) is an Irish photographer who studied at the University of Ulster (MFA Photography, 2012). His work was included in ‘An Irish View’ at Rencontres d’Arles in 2009, and featured in Source magazine. As winner of the 2015 First Book Award , his book was published by MACK, and the work exhibited at Media Space, London. This is Arnold's first book.
Publisher: Mack Books