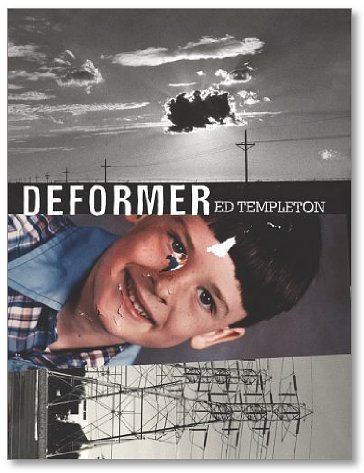 Deformer
by Ed Templeton
Eleven years in the making and compiling more than thirty years worth of material: Ed Templeton’s Deformer, a multi-media scrapbook of his upbringing in suburban Orange County, California. This beautifully designed volume, entirely art-directed by Templeton himself, is sure to be a major work. Its photographs give a sun-drenched glimpse of what it might be like to be young and alive in what Templeton refers to as “the suburban domestic incubator”. Deformer intertwines photographs, paintings, drawings, sketchbook pages, disciplinary letters from his grandfather and religious notes from his mother into a magnificent narrative of teenage isolation and social criticism. Many of the photographs have come about due to his life as a professional skateboarder. “Skateboarding allowed me to travel the world and that showed me that where I lived was totally messed up,” says Templeton. “That perspective has fueled me and become a source for my art.” Through photographs and stories, Ed Templeton’s Deformer offers readers an intensely close and personal look at not only one artist’s coming of age, but also the often overlooked and forgotten dark side of the American dream. Aaron Rose Ed Templeton (1972) started skateboarding in 1985 in his hometown, Huntington Beach, California, and very soon turned to be a professional skateboarder, which allowed him to tour Europe. As artist he began by painting the graphics for his skateboard company, Toy Machine Bloodsucking Skateboard Company in 2000. Deformer is also the title of a 1996 documentary film about Templeton directed by Mike Mills.
ISBN: ISBN: 978 88 6208 050 7
Publisher: Damiani