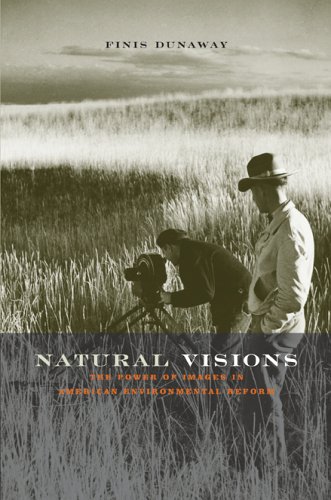 Natural Visions: The Power of Images in American Environmental Reform
by Finis Dunaway
Publisher's Description
Walden Pond. The Grand Canyon.Yosemite National Park. Throughout the twentieth century, photographers and filmmakers created unforgettable images of these and other American natural treasures. Many of these images, including the work of Ansel Adams, continue to occupy a prominent place in the American imagination. Making these representations, though, was more than a purely aesthetic project. In fact, portraying majestic scenes and threatened places galvanized concern for the environment and its protection. Natural Visions documents through images the history of environmental reform from the Progressive era to the first Earth Day celebration in 1970, showing the crucial role the camera played in the development of the conservation movement.

In Natural Visions, Finis Dunaway tells the story of how visual imagery—such as wilderness photographs, New Deal documentary films, and Sierra Club coffee-table books—shaped modern perceptions of the natural world. By examining the relationship between the camera and environmental politics through detailed studies of key artists and activists, Dunaway captures the emotional and spiritual meaning that became associated with the American landscape. Throughout the book, he reveals how photographers and filmmakers adapted longstanding traditions in American culture—the Puritan jeremiad, the romantic sublime, and the frontier myth—to literally picture nature as a place of grace for the individual and the nation.

Beautifully illustrated with photographs by Ansel Adams, Eliot Porter, and a host of other artists, Natural Visions will appeal to a wide range of readers interested in American cultural history, the visual arts, and environmentalism.