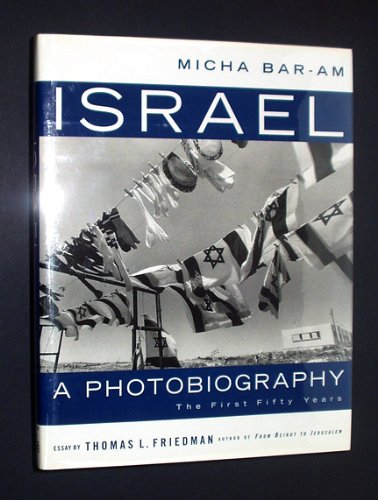 Israel: A Photobiography: The First Fifty Years
by Thomas Friedman
Publisher's Description
A masterful synopsis, in photographs, of the first 50 years of the existence of a modern Jewish state.
Amazon.com Review
From Robert Capa's 1948 photograph of soldiers on the road to Jerusalem to the 1996 shot of a small child gazing into a blue sky filled with colorful kites, the photographs in Israel: A Photobiography depict a broad spectrum of life in a complicated country. It is telling that the major sections of the book are organized by war--Sinai Campaign, Six-Day War, Yom Kippur War, Lebanon War. Stirring images of soldiers on the front lines, refugees on the move, an off-duty fighter tending the family barbecue with a gun on his hip, and Druze women in the Golan Heights shouting to their relatives across the border in Syria remind readers of the harsh reality behind the headlines. Many photographs capture quieter, more personal moments, such as a Greek Orthodox wedding, a man visiting the Tel Aviv zoo, and a woman soothing her infant outside a kibbutz dining hall. Individually the pictures tell thousands of different--even divisive--stories of the people in and around Israel. When regarded collectively, though, these provocative images form a portrait of a nation struggling to find its place. An essay by Thomas L. Friedman, the New York Times's Jerusalem correspondent, explores the contradictions that are elemental to the country, introduces the photographs, and leads readers to consider the pictures from many different angles.
ISBN: 068484513X
Publisher: Simon & Schuster
Hardcover : 200 pages
Language: English