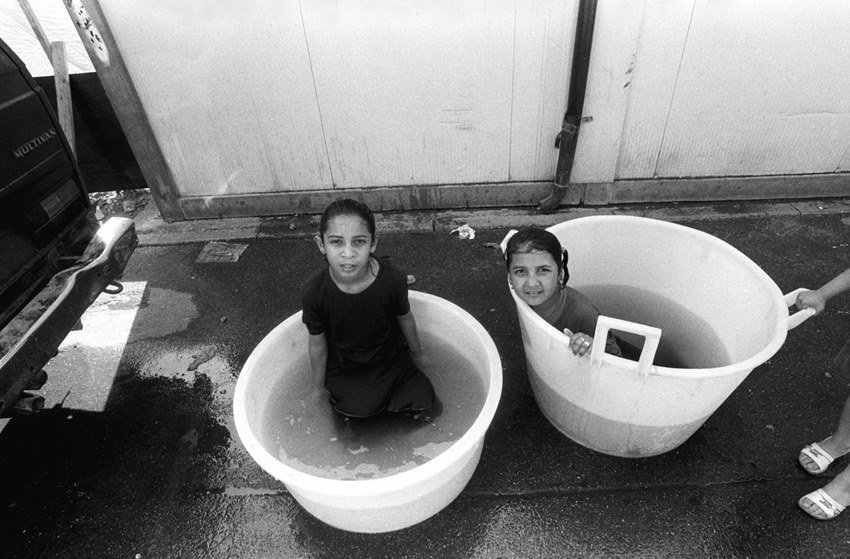 Il mondo di Vesna
by Maurizio Cimino
In Naples there is only one legal gipsy camp, located behind the Secondigliano prison. When I saw this camp it appeared to me a scenery oneiric and real at the same time. This was the world of Vesna, a deaf-mute little girl: the microcosm of her family was full of childish games inside d privations and discomforts but also of socialization times. The main subjects that at racted my attention were children with whom my interaction was particularly easy.

Through the photography I got involved into the dreamy world of Vesna and her five brothers. My experience was based on the empathy and on the sharing of the subjective lived background. The Roma people constitute, as a whole, an extremely vulnerable group of inhabitants in our countries. They are still rejected, after centuries of discrimination and slavery, with brutal effort. Gypsies are also coalesced because they live in precarious situations almost everywhere inside the European Union, then their existence is relegated to the borders of cities and emarginated by society. The individuals are fragile, their lives are spent in a sense of disorientation and often passive resignation.The image of Romanies is basically the result of medieval generalizations; an irrational intolerance is jo ned with a superficial information distorted by prejudice and stereotypes: often this information is artfullybuilt by populist governments (like currently in France or Italy) intenton creating social confusion about the “public enemy”, again stigmatizing gypsies. Rarely people in Rome are considered in their cultural peculiarities and their complexity:they let me think to a sort of magic caleidoscope where dance and tears swim together in a musical sea of life.
ISBN: ISBN 88-8292-300-2
Publisher: Istituto Italiano per gli Studi Filosofici