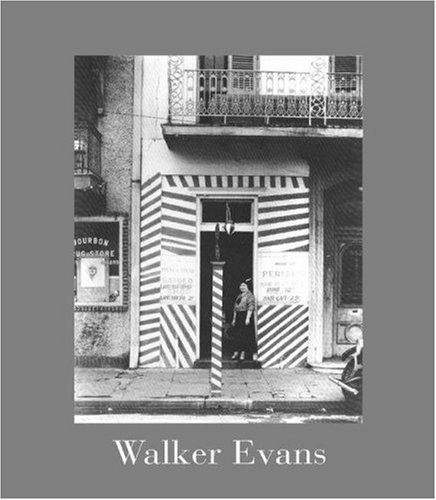 Walker Evans
by Maria Morris Hambourg
Publisher's Description
A tenant farmer's deprivation-lined face. Antebellum homes that have seen better days. The display windows of small-town main streets. The early subway commuter. Billboards. The images made by photographer Walker Evans (1903-1975) are icons of national identity that have shaped Americans' views of themselves and directly influenced important currents of modern art. This major catalogue-published to accompany a retrospective exhibition originating at The Metropolitan Museum of Art and traveling to San Francisco and Houston-presents the full range of Evans's work, from his 1920s black-and-white street scenes of anonymous urban dwellers to the color photographs of signs and letter forms from his final years.

Soon after he returned from Paris to New York City in 1927, Evans began contributing to the development of American photography. He captured the substance of people and buildings with a spare elegance that is utterly unpretentious. His gaze is serious but often amused as well, direct yet never simple. During the 1930s, Evans traveled throughout the South to chronicle the effects of economic hardship. The time that he and writer James Agee spent with Alabama sharecropper families yielded an evocative, honest record of the Great Depression, which was published in book form as Let Us Now Praise Famous Men (1941). Evans then turned his lens back on New Yorkers, photographing subway riders with a camera hidden in his coat. He continued to influence American self-perception as staff photographer for Fortune from 1945 until he accepted a professorship at Yale in 1965.

Evans-who always chose art over what he criticized as artiness-wrote, in Photography (1969), 'Whether he is an artist or not, the photographer is a joyous sensualist, for the simple reason that the eye traffics in feelings, not in thoughts. This man is in effect a voyeur by nature; he is also reporter, tinkerer, and spy.'

Although his work has received many awards, been enshrined in the best museums, and been exhibited on several continents, Evans's total corpus is only now being fully examined. This important book revises our appreciation of Evans by presenting previously unknown material in an accessible context. Essays by Maria Morris Hambourg, Jeff L. Rosenheim, Doug Eklund, and Mia Fineman offer novel insights into the sources and legacy of Evans's work. The result is a superb exploration of what was achieved by one of our finest, mostly deeply American artists.
Amazon.com Review
In 1930 a disaffected young photographer in New York pointed his camera at two workers shoving a huge sign reading DAMAGED into a truck. With that image, Walker Evans gave birth to the quirky, edgy genre of street photography. Yes, this is the same Walker Evans famous for eye-level photographs of Alabama sharecroppers, rural churches and roadside signs. The special appeal of Walker Evans is that—in addition to nearly 200 classic photographs—it offers new images and fresh assessments of his work, based on diaries, letters, field notes and unpublished negatives acquired a decade ago by the Metropolitan Museum of Art in New York. The engagingly written essays by four specialists all bump up against the contradictory impulses of this meticulous, aloof yet curiously passionate artist. A self-described "gray man," he hated color photography. Yet the photographs from his final years--he died in 1975--include strikingly offbeat Polaroids of the glum or startled faces of friends and acquaintances. Four decades earlier, too inhibited to confront strangers directly, he hid a camera in his coat to capture the slack faces of subway riders. Despite the unadorned power of his images of people, Evans had a deeper connection to vernacular architecture and roadside signs. He photographed these everyday subjects straight on, at eye level, deliberately opting for the most deadpan approach. Yet the images are imbued with Evans' unique sensitivity to subtle visual rhythms. Influenced by Surrealism, he freely cropped photographs to shift the viewer’s perspective. Despite his ardent scrutiny of the American scene in the 1930s, Evans stood apart from politics and disdained both sentimentality and social criticism. His omnivorous appetite for the culture of his time was tempered by the sober documentary influence of nineteenth century photographers Eugène Atget and Matthew Brady. For all its shrewd commentary, this beautifully produced book discusses Evans' life only insofar as it illuminates the story of the photographs. More detailed accounts are available in biographies by James R. Mellow and Belinda Rathbone. --Cathy Curtis
ISBN: 0691119651
Publisher: Princeton University Press
Paperback : 332 pages
Language: English
Dimensions: 9.8 x 11.5 x 0.9 inches