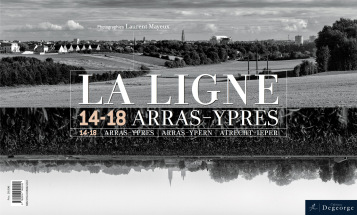 La Ligne 14-18
by Laurent Mayeux & Virginie Girard
A hundred years ago, the IWW, supposed to last a few weeks, went on and on. Troops hid themselves facing each other. By the end of 1914, the front line settled in Belgium and in the north of France. The fate of the World would be decided on this line. From Ypres in Belgium to Arras in the North of France, on both sides of this 50km long line, nations, from all other the world, fought against each other : Germans, New- Zealanders, Canadians, British, Indians, Australians... ! Mostly young foreign soldiers, rather than French (located in Verdun and la Marne), would come here to fight and die on this foreign land. Facing them, an horizon, a foreign landscape, a line. A mound, a hill to c!onquer.! As I was myself born on this line many decades later,! The IWW is part of my history and identity. Like each pupil native from this region, I visited the sites of remembrance of this war. With my sisters, we used to go biking in the countryside near Arras on Wednesdays, also playing hide-and- seek in the military cemeteries.! A hundred years later, there are no veterans left. This war is definitely in the past and in archives. This front line is like a scar on the skin. Over time, it fades. Red p!atches and swollen parts are slowly healing.! Until one day, I discovered the pictures of Somerset landscapes taken by the famous English war photographer Don Mc Cullin. I found there a way to tell a!bout the war in my own personal way.! Scars fade but never disappear.
ISBN: 978-2-916992-24-2
Publisher: Editions DeGeorge