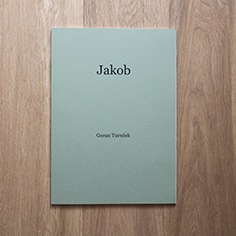 In this big green volume, we are teleported to eastern Slovenia where instead of documenting his grandfather’s house, the domestic space becomes a stage on which the artist (who is also a dancer) brings him back to life. Each spread features several images where Turnsek’s contorts himself into a hunched figure to reenact his daily routine and moments from his life, like a young boy playing dress up. Simple domestic tasks become jagged and oddly assiduous, given surreal weight from the one line of descriptive text nestled at the bottom of the spread. ( Strange and Unfamiliar Once Again: Sophie Wright on Unseen 2015, Amsterdam)