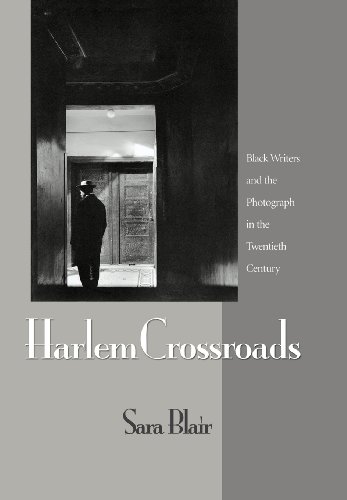 Harlem Crossroads: Black Writers and the Photograph in the Twentieth Century
by Sara Blair
Publisher's Description
The Harlem riot of 1935 not only signaled the end of the Harlem Renaissance; it made black America's cultural capital an icon for the challenges of American modernity. Luring photographers interested in socially conscious, journalistic, and aesthetic representation, post-Renaissance Harlem helped give rise to America's full-blown image culture and its definitive genre, documentary. The images made there in turn became critical to the work of black writers seeking to reinvent literary forms. Harlem Crossroads is the first book to examine their deep, sustained engagements with photographic practices.

Arguing for Harlem as a crossroads between writers and the image, Sara Blair explores its power for canonical writers, whose work was profoundly responsive to the changing meanings and uses of photographs. She examines literary engagements with photography from the 1930s to the 1970s and beyond, among them the collaboration of Langston Hughes and Roy DeCarava, Richard Wright's uses of Farm Security Administration archives, James Baldwin's work with Richard Avedon, and Lorraine Hansberry's responses to civil rights images. Drawing on extensive archival work and featuring images never before published, Blair opens strikingly new views of the work of major literary figures, including Ralph Ellison's photography and its role in shaping his landmark novel Invisible Man, and Wright's uses of camera work to position himself as a modernist and postwar writer. Harlem Crossroads opens new possibilities for understanding the entangled histories of literature and the photograph, as it argues for the centrality of black writers to cultural experimentation throughout the twentieth century.
ISBN: 0691130876
Publisher: Princeton University Press
Hardcover : 353 pages
Language: English
Dimensions: 6.3 x 9.3 x 1.1 inches