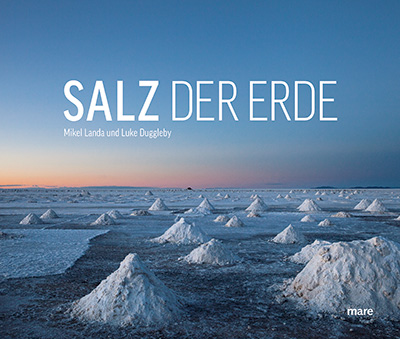 Salz der Erde
by Luke Duggleby and Mikel Landa
Taken for granted in modern times yet demanded by our bodies, salt remains one of the most important minerals for human survival. Since humans have walked this earth they have searched out salt. For millennia salt has represented wealth. Empires were built on the controlling of the salt trade.

These trade routes have to this day remained major thoroughfares, routes that built alliances, secured empires and provoked revolutions. From the Chinese, the Romans, the French to the Ventians, these governments and many others raised money through the taxing of salt which was then used for commercial expansion and often to fund wars. Before the development of refrigeration, salt was needed to preserve food, to stop it rotting in hot climates, so sailors could travel the oceans still with food. e important of this mineral in the history of the world and to the development of the human is little known and regularly taken for granted.

As with many things after the industrial revolution and the development of mass production, many of these traditional salt making methods began to disappear as new, cheap factory-made salt began to flood the market. Yet in remote regions throughout the world, on isolated islands, hidden in remote valleys or high up on mountainous plateau’s, there are some people who still use the methods of old to produce this vital mineral.

Over a five year period British photographer Luke Duggleby and Spanish architect Mikel Landa traveled the globe searching out such places. From Ethiopia to China. Bolivia to Denmark. Senegal to Japan they found communities who’s salt making method hasn’t changed for centuries. These people toil in the heat, undertaking back-breaking work to produce salt because they have always done it, for generations longer than they can remember.

Many such places are now under threat. Modernity is creeping in and now their children no longer want to follow in their parents footsteps. They are disappearing and it is this that led to the creation of this project. The duo's aim was to document these ancient methods, so varied, so ingenious, before they are lost forever. But more than that it is also a tribute to the workers, people who know how to produce some of the nest salt ever tasted. People who keep these ancient traditions alive but continue to remain unnoticed and unappreciated yet produce some of the best salt on the planet.