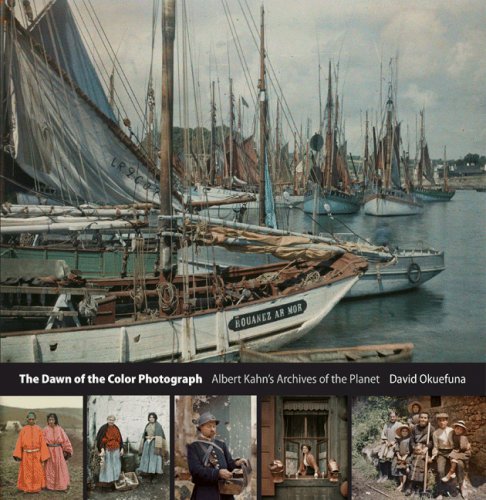 The Dawn of the Color Photograph: Albert Kahn's Archives of the Planet
by David Okuefuna
Publisher's Description
In 1909 the French banker and philanthropist Albert Kahn launched a monumentally ambitious project: to produce a color photographic record of human life on Earth. An internationalist and pacifist, Kahn believed that he could use the new autochrome-the world's first portable, true-color photographic process-to create a global photographic archive that would promote cross-cultural understanding and peace. Over the next twenty years, he sent a group of photographers to more than fifty countries around the world, amassing more than 72,000 images. Until recently his collection was all but forgotten. Now, a century after he began his 'Archives of the Planet' project, this book-richly illustrated in color throughout-and the BBC series it follows are bringing Kahn's dazzling early twentieth-century pictures to a wide audience for the first time, and putting color into what we usually think of as a monochrome world.

Kahn's photographers captured times, places, and people we simply do not expect to see in color photographs. They documented age-old cultures on the brink of being changed forever by war, modernization, and Westernization, recording the last years of Ireland's traditional Celtic villages and the late days of the Austro-Hungarian and Ottoman empires. They photographed First World War soldiers in their trenches as well as the postwar celebrations in London. In the course of their travels, they also took the earliest color photographs in countries as varied as Vietnam and Brazil, Mongolia and Norway, Benin and the United States.

After being financially ruined in the Great Depression, Kahn was forced to bring his project to a premature end, but today his collection of early color photographs is recognized as one of the world's most important. The Dawn of the Color Photograph makes it easy to see why.
ISBN: 0691139075
Publisher: Princeton University Press
Hardcover : 336 pages
Language: English
Dimensions: 9.4 x 9.4 x 1.3 inches