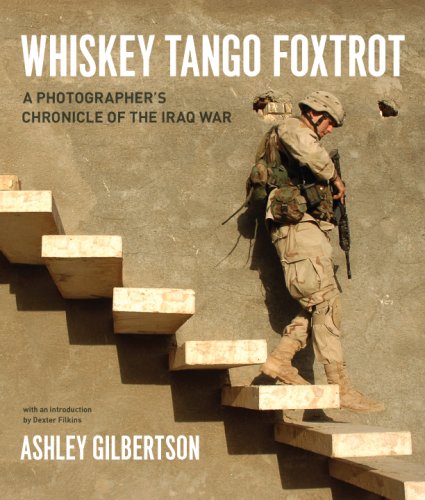 Whiskey Tango Foxtrot: A Photographer's Chronicle of the Iraq War
by Dexter Filkins
Publisher's Description
This collection of photographs and commentary presents a relentlessly tragic vision of the ongoing conflict in Iraq, where freelance and later New York Times photographer Gilbertson began working even before the U.S. invasion. Based in Iraqi Kurdistan, he missed much early fighting when Turkey refused passage to U.S. troops. Entering the northern city of Mosul, he was outraged to see newly liberated citizens engaged in an orgy of looting, quickly joined by the Kurdish troops whom he accompanied. Gilbertson's camera records chaos descending as the Kurds and Arabs (longtime enemies) sectioned off their neighborhoods and began arming themselves, even before Baghdad fell. In dozens of striking battle scenes, American soldiers go about their business with courage and discipline but show little affection for Iraq's civilians and positive contempt for its army. While plenty of dead and injured Iraqis are pictured, no dead Americans appear (because fellow soldiers forbid photographs), though captions in half a dozen name those later killed. The author rarely passes up the chance to record blood stains, ruined homes, flames and explosions as well as the sad stories behind them. Not yet 30, Gilbertson has clearly studied James Nachtwey, Robert Capa and David Douglas Duncan; this impressive book shows he has absorbed their lessons.
ISBN: 0226293254
Publisher: University Of Chicago Press
Hardcover : 260 pages
Language: English
Dimensions: 8.6 x 10.1 x 1 inches