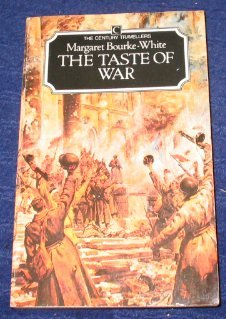 The Taste of War (Century Travellers)
by Margaret Bourke-White
Publisher's Description
This book is an anthology of Bourke-White's writings, taken from the books she published during the 1940s, edited by Jonathan Silverman. "The three books from which this volume has been compiled represent a reporter's personal chronicle of World War II. Although too personal, perhaps, to be considered works of serious history, the three books are also in a different class than most war memoirs, chiefly because Bourke-White herself was in a different class than most other reporters. . . .She was a person who lived, above all, to record history, and in documenting the remarkable drama of this century, as she did, secured herself a remarkable place in its history as well."--Jonathan Silverman.
ISBN: 0712610308
Publisher: David & Charles
Paperback : 600 pages
Language: English