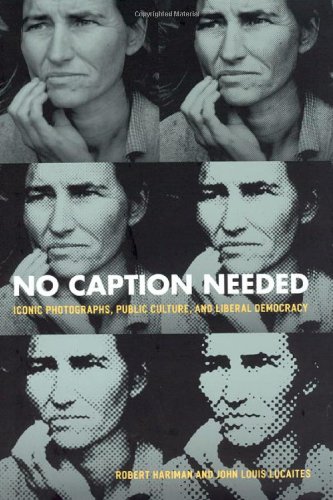 No Caption Needed: Iconic Photographs, Public Culture, and Liberal Democracy
by Robert Hariman
Publisher's Description
A gaunt woman stares into the bleakness of the Great Depression. An ecstatic sailor plants a kiss on a nurse in the heart of Times Square. A naked Vietnamese girl runs in terror from a napalm attack. An unarmed man, alone, stops a tank in Tiananmen Square. Immediately familiar, each of these photographs has become an icon, galvanizing emotions and shaping public life. But why are these images so powerful? How did they become so prominent in the fast-changing worlds of popular culture and political debate?

In No Caption Needed, Robert Hariman and John Louis Lucaites explore how these and other photojournalistic images have achieved iconic status. The authors’ in-depth examinations consider both the images themselves and their circulation over time. They demonstrate how the decisive moments captured in these individual images are later reproduced in billboards, cartoons, posters, tattoos, Web pages, and other media to influence political beliefs, attitudes, and identity. Iconic images are shown to be models of visual eloquence, signposts for collective memory, and means of persuasion across the political spectrum.

Arguing against the conventional belief that the emotional power of iconic photos is dangerous because it short-circuits rational thought, Hariman and Lucaites instead make a bold case for the necessity of visual imagery in modern democratic life. No Caption Needed is a powerful demonstration of the vital role of photojournalism—and the emotional responses it triggers—in a healthy democracy.
ISBN: 0226316068
Publisher: University Of Chicago Press
Hardcover : 432 pages
Language: English
Dimensions: 6.3 x 9.3 x 1.2 inches