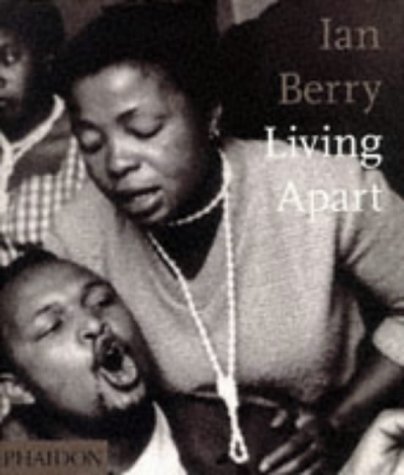 Living Apart
by Ian Berry
Publisher's Description
At seventeen, years before he would become a member of Magnum, Ian Berry left England for South Africa where he began one of the longest on-going photojournalistic projects of our times--documenting life within apartheid, and ultimately documenting its collapse. His images are of a caliber set by the Magnum agency's masters Robert Capa, Henri Cartier-Bresson, and George Rodger. Every scene depicts distinct and often contradictory presences, people emotionally engaged in some moment revealing the broader outline of history--a black worker wheeling inanely expressive white mannekins past a jeering older black woman, black boy playing a cigar-box guitar in the doorway of his burnt out home, wrinkled white prospectors looking off towards the horizon during the last diamond rush. An important visual document, Living Apart is as strong an historical resource as a work of art.
Amazon.com Review
Berry, an Englishman who first made his way to South Africa as a teenager, has spent four decades documenting ordinary lives in extraordinary circumstances. After photographing the Sharpeville riots of 1960--a pivotal event--he elected to concentrate not on "the violent concentration between black and white, but the society that gave cause to it." His efforts to get "under the skin" of that tense society have resulted in a rich and enlightening chronicle of segregation that recalls the powerful photojournalism of W. Eugene Smith.
ISBN: 0714835234
Publisher: Phaidon Press
Hardcover : 256 pages
Language: English
Dimensions: 10.2 x 11.7 x 1.4 inches