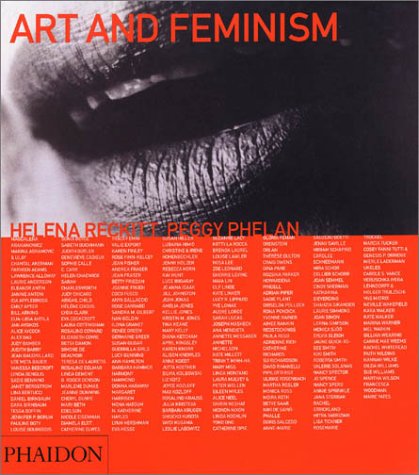 Art and Feminism
by Helena Reckitt
Publisher's Description
"Feminism has had a crucial impact on late twentieth-century art, inspiring some of the most pioneering developments in sculpture, painting, performance, photography, film and installation. The art world has been transformed by feminists who at the same time have been among its chief critics. Feminism has redefined the very terms of late twentieth-century art: it has exposed assumptions about gender, race, age and class. Selected by editor and researcher Helena Reckitt, this collection presents the rich diversity of art informed by feminism from the 1960s to the start of the twenty-first century."-the publisher.
Amazon.com Review
No question about it, Art and Feminism is the basic reference book for feminist art. Part of Phaidon's excellent Themes and Movements series, it surveys three decades of a tumultuous history with a brief but inclusive essay, reproductions of works by 155 artists, and lengthy excerpts from groundbreaking texts by artists and theorists. The challenge posed by a movement that spans several artistic generations and includes many contentious players is ably met by essayist Peggy Phelan, professor of performance studies at New York University. She illuminates the intertwined workings of feminist politics and literary criticism, psychoanalysis, race and queer theory with clarity and a refreshing absence of doctrinaire pronouncements.

The illustrations are organized chronologically under sometimes quirky headings, beginning with "Too Much" (late-'60s performance pieces by such pioneering figures as Carolee Schneemann, Miriam Schapiro, Eva Hesse, Louise Bourgeois, and Yayoi Kusama). The final section, "Femmes de Siècle," contains work from the '90s by Coco Fusco, Kara Walker, Mona Hatoum, Jenny Saville, and others exploring "collective memories ... and traumas." Essays range from the raw invective of Valerie Solanas's "Scum Manifesto" (1967) to the reasoned arguments of Adrian Piper's "The Triple Negation of Colored Women Artists" (1990). While some may argue that the book could be more inclusive--it deals overwhelmingly with women artists who exhibit in major Western cultural centers--it offers an unparalleled breadth of reference. Irked by the perfect bodies of many feminist artists who use nudity in their work, I was struck by the poignancy and honesty of Hannah Wilke--a glamorous figure in '70s and '80s performance art--who chose to memorialize her bald, bloated self in photographs months before her untimely death from cancer in 1993. --Cathy Curtis