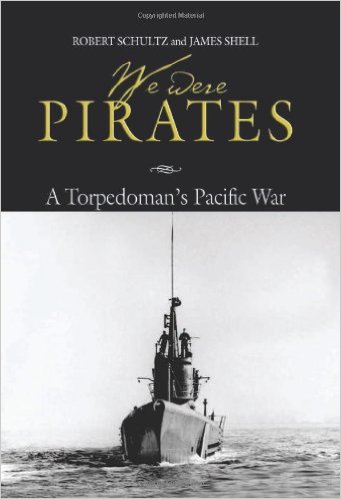 We Were Pirates: a Torpedoman's Pacific War
by Robert Schultz & James Shell
A sailor’s extraordinary experiences on an American submarine in the Pacific are candidly reported in this eyewitness account of war from a torpedoman’s perspective. Robert Hunt managed to survive twelve consecutive war patrols on the submarine USS Tambor. During the course of the war, Hunt was everywhere that mattered in the Pacific. He stood on the bow of the Tambor as it cruised into Pearl Harbor just days after the devastation of the Japanese air raid, peered through binoculars as his boat shadowed Japanese cruisers at the Battle of Midway, ferried guns and supplies to American guerilla fighters in the Philippines, fired torpedoes that sank vital Japanese shipping, and survived a near-fatal, seventeen-hour depth-charge attack. For “exceptional skill and proficiency at his battle station” Hunt received a commendation from Fleet Admiral Chester W. Nimitz. This WWII torpedoman’s account of the war offers the rare perspective of an enlisted seaman that is not available in the more common officer accounts.To capture and recount the progress of the Pacific War through Hunt’s eyes coauthors Robert Schultz and James Shell examined the young submariner's war diary, as well as crew letters, photographs, and captains' reports, and they also conducted hours of interviews. Their vivid descriptions of the ways in which sailors dealt with the stress of war while at sea or on liberty show a side of the war that is rarely reported. The fact that Hunt’s submarine was the first of a new fleet of World War II boats and the namesake of a significant class adds further value to his remarkable story.
ISBN: 978-1591147787
Publisher: Naval Institute Press