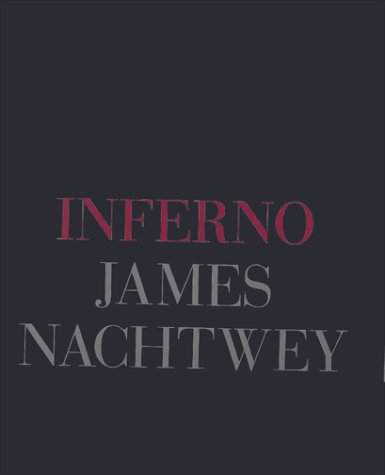 Published to coincide with Nachtwey's first major retrospective at the ICP, Inferno revisits a career of harrowing photojournalism. From Rwanda and Somalia to Chechnya and Bosnia, Nachtwey's images close in on the human suffering that lies at the center of any conflict.
Amazon.com Review
Though he is probably the world's most honored recent war photographer, James Nachtwey calls himself an "antiwar photographer," as the preeminent critic Luc Sante notes in his excellent foreword to Inferno, a landmark collection of 382 war-crime photos. Nachtwey has taken shrapnel and had his hair literally parted by a bullet, but he's never lost his compassionate outrage. The stunning images in this huge-format book--brutally abused Romanian orphans, Rwandan genocide victims, a rat-hunter family of Indian Untouchables barbecuing dinner, skeletal dehydration victims in Sudan, the miserable in Bosnia, Chechnya, Zaire, Somalia, and Kosovo--are excruciating to look at, yet impossible to tear your eyes away from. Nachtwey's art is meant to force us to face unbearable facts. Faces are the key: you can't gaze into the eyes of a Romanian toddler tied to a bed, or wired to a primitive "electromagnetic therapy" device, and not grasp the horror more fully than you would by watching a TV news item or reading a newspaper piece. (The book's text explains each photo's context.)

Inferno is also a masterpiece in strictly aesthetic terms. The power of Nachtwey's images transcends journalism. Bloody handprints on a living-room wall in Kosovo, the ghostly imprint of a Serb victim's vanished body on a floor, a Hutu with crazed eyes displaying the machete gashes he received for opposing the Tutsis' butchery, a howling orphan in a crib, one eye contracted in anger--these are compositions that depend, like Goya's, on the artist's skill as much as the subject's legitimate claim on our conscience.

Nachtwey's photographs make us capable of imagining that it could have happened to us. They are hard to forget, or forgive. --Tim Appelo