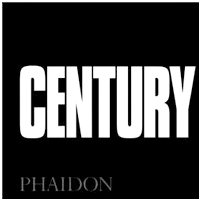 Century
by Bruce Bernard
Publisher's Description
Featuring seventeen pounds of the most compelling historical photographs of the twentieth century, Century is an uncommonly brilliant collection of art and news images telling the story of the most exhaustively documented century ever.
Amazon.com Review
The impact of photography, with its permutations and manipulations, has created incredible images of human hope and suffering throughout the 20th century. Inured as readers may be to the sights of our age, anyone who leafs through the astonishing chronicle that is Bruce Bernard's Century cannot fail to be impressed and moved by this vast visual document of the past 100 years. Weighing in at around 10 pounds and containing more than 1,000 photographs, this significant document of 100 years of human history displays Bernard's 30 years of experience as a picture editor with the Sunday Times Magazine.

Divided into six sections--1899-1914, High Hopes and Recklessness; 1914-33, Self-Inflicted Wounds Remain Infected; 1933-45, Rise and Fall of the Unspeakable; 1945-65, Atomic Truce Walks a Tightrope; 1965-85, Vietnam to the Moon to Soviet Collapse; and 1985-99, Chaos and Hope on a Burdened Planet--with accompanying text and quotations, Century presents an average of 10 images for each year, from the banal to the brilliant. In 1921 readers witness Claude Monet overseeing his glorious water-lily gardens. Next to that is an image of starving children in the Russian famine that followed the end of World War I. The young Princess Elizabeth walks her corgi in London's Hyde Park in 1934, while the facing page shows the moment of King Alexander I's assassination in Marseilles. American GIs laugh with girls on a German beach in 1946--a couple of pages on from the then recently revealed horrors of the concentration camp at Auschwitz. Three decades later, sees the Sex Pistols inaugurating the era of punk rock, while anti-apartheid leader Steve Biko lies murdered by police in his South African jail cell. By turns harrowing and humorous, Century is a magnificent photographic testament to 100 years of human advancement, futility, acts of heroism, and episodes of unspeakable cruelty. The book ends on a note of hope with a still from a 1999 German production of Beethoven's opera Fidelio, a triumph of goodness over evil. It is nonetheless difficult to erase the preceding image of refugees fleeing Kosovo in the same month and the same year--history's hour of darkness come round once more. --Catherine Taylor, Amazon.co.uk