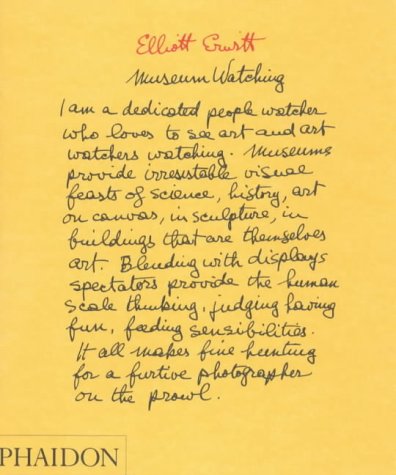 Museum Watching
by Elliott Erwitt
Publisher's Description
Between jobs for the Magnum agency, Elliott Erwitt has spent a lot of time in museums watching people. This collection, drawing upon forty years of personal work, is another showcase for Erwitt's brilliantly sardonic eye.
Amazon.com Review
When he's not on assignment, the indefatigable Elliott Erwitt often takes his camera and heads for a museum, where, he says, finding interesting and amusing subjects to photograph is "like shooting fish in a barrel." He proves his point with this wide-ranging collection of images from the last 45 years that look at lookers from Cambodia and Japan to New York and Paris. There are countless characteristically mischievous moments here: a middle-aged couple pores over the Clouet painting of two topless women--one the king's mistress preparing for her bath and the other her sister, tweaking her nipple. In a snapshot on the facing page, a soldier fondles the bronze breast of a goddess in an Italian piazza. In the Prado gallery, where the clothed and the nude Majas of Goya are installed side by side, the former is studied by a lone female and the latter obscured by a crowd of male admirers. There are multiple shots of the marmoreal buttocks of countless shapely sculptures flanked by passersby whose glances speak volumes about the hallowed halls of high art.

But there are always other, more somber moments in any Erwitt collection. Here, such pictures include a shot of the bleak railway tracks that led inexorably through the gates of Auschwitz and the bins there of thousands of pairs of eyeglasses that were never worn again. In Cambodia, Erwitt finds quiet beauty in the jungle-bound ruins of the temple of Angkor Wat, but he also visits the present, in the form of the Tuol Sleng Genocide Museum in Phnom Penh, where photographs of thousands of slaughtered Cambodian citizens pack the walls, from floor to ceiling.

As always, Erwitt's ultimate subject is the human condition, captured with gentleness, intelligence, and compassion, this time in a context that narrows his scope a bit, but not much. --Peggy Moorman