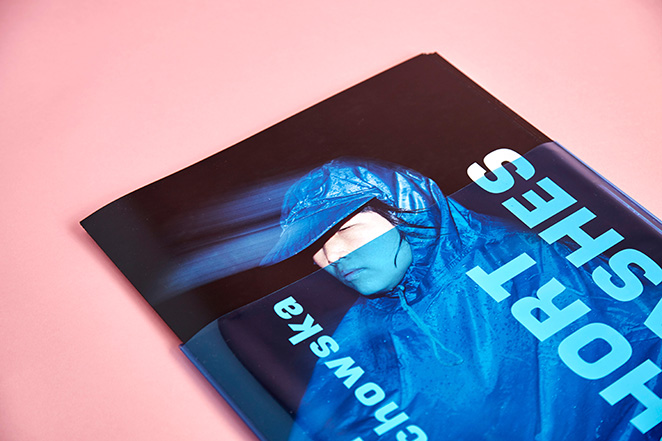 Short Flashes
by Wiktoria Wojciechowska
During her time in North East China, Oskar Barnack Newcomer award winner Wiktoria Wojciechowska photographed intrepid, rain drenched cyclists as they fleetingly passed her by during the typhoon season. Although in China Wojciechowska had found an unexpected sense of home, she also found it eternally difficult to connect with people. Influenced by the words of Polish novelist Wiesław Myśliwski, Wojciechowska set out to capture a physical reference to the human faces that sped past her, using a flash on her camera. The result is a collection of photographs that are initially exciting, vibrant and seemingly playful, but infact embody a melancholic metaphor for a wistful sense of place. The work exists as a typological document and, as Wojciechowska describes, a collection of faces for memory, building ‘a new family album to remember the people she never knew’.

‘ There are infinitely many of these faces I carry inside myself. Conceived in short flashes. I don’t know whose, where, or when. I know nothing about them. But they live in me. Thoughtfulness, gazes, sorrows, pallor, grimaces, bitterness - they live in me, detained like on photographies.' - Wiesław Myśliwski, A Treatise on Shelling Beans, 2006

• Nominated for the Deutsche Börse award 2017

Belle Hutton, AnOther Magazine: "To create a highly amusing and deeply resonant series of photographs of rain-drenched travellers is surely no mean feat, but Short Flashes pulls it off with care and aplomb." www.anothermag.com

Spiegel Online, Christoph Stockburger: "They are an allegory of the hardships of daily commuting, giving the individual a face and dignity in the crowd, and thanks to the sometimes colorful raincapes, they also have something whimsical." (Translated form German) www.spiegel.de

It's Nice That, Lucy Bourton: "Each snapshot is consistent, highlighting a despondent, drenched commuter hilariously wearing a brilliantly bright poncho to shelter from the rain. When described, a series of photos of people travelling to and from work in terrible weather could appear dull, but Wiktoria’s photographic ability and beaming flash makes them appear otherworldly." www.itsnicethat.com

Feature on The Guardian: http://www.theguardian.com/artanddesign/gallery/2016/may/06/wiktoria-wojciechowska-short-flashes-china

Laura Malonee, Wired.com: "The cyclist’s faces are crisp and distinct, contrasting with the gestural blur of their turquoise, purple and yellow coats. The effect is at once quirky and almost painterly, combining clarity and confusion." www.wired.com
ISBN: 978-0-9562470-8-7
Publisher: Bemojake