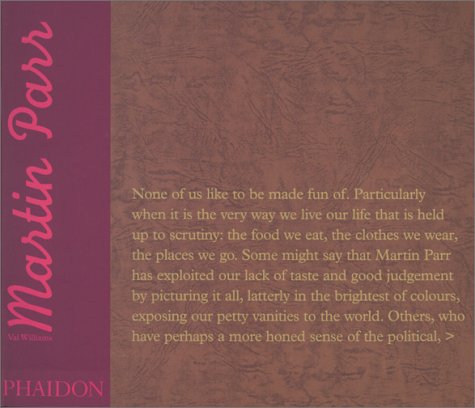 Martin Parr
by Val Williams
Publisher's Description
Amazon.com Review
Martin Parr presents a retrospective of the leading British photographer's 30-year career, entirely appropriate to Parr’s wry, equivocal look at nostalgia and tradition. A suburban warrior from Surrey, Parr was one of the first to drag British photography from the realms of advertising, fashion, or hobby to the pretensions of serious art. A collector by nature, even a trainspotter, and inspired by picture postcards (as his superbly monotonous Boring Postcards series bear witness), Parr has a mildly obsessive quality that is central to his art and--through his books, exhibitions, television documentaries, and most notably, his work for magazines and newspapers--is immediately recognizable, as well as influential, as Richard Billingham’s Ray's a Laugh demonstrates. Parr's themes are for the most part unwavering, yet, ultimately, it’s other people’s taste that lights up his photographs.

Attracting critics as well as fans, including fellow Magnum member Henri Cartier-Bresson, who remains “highly suspicious” of Parr’s photography, he has never flinched from his content, saying of it, “certainly my photographs have a critical bite to them. I knew I was middle-class...." Val Williams is also conscious of that fact in her lively essays that accompany the image selections from Parr's career, following him from the north of England to Ireland, back to the northwest, and then down to Bristol. From his early days taking snaps at Butlin’s to his strongest projects such as The Last Resort, The Cost of Living, and Think of England, he renders his subject curiously denuded, despite frequent heavy adornment. Of similar kitchen-sink, kitschy curiosity as Pulp explore in their so-English music, Parr is less concerned with the "ordinary" than with the life less ordinary, such as holidays or social occasions, at which we exhibit our most excruciating foibles. Interestingly, when he moves outside his native land, as with Small World, his pictures remain technically superb, but they lose the intuitive third dimension that his engrossed Englishness provides when observing his own. Parr may divide the critics at times, but this tasty body of work argues persuasively for his provocative and accomplished take on life, snapped from the inside looking in. --David Vincent, Amazon.co.uk