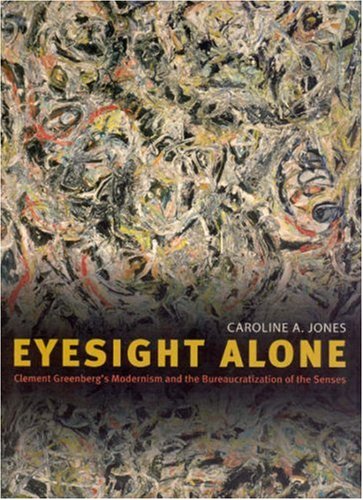 Eyesight Alone: Clement Greenberg's Modernism and the Bureaucratization of the Senses
by Caroline A. Jones
Publisher's Description
Even a decade after his death, Clement Greenberg remains controversial. One of the most influential art writers of the twentieth century, Greenberg propelled Abstract Expressionist painting-in particular the monumental work of Jackson Pollock-to a leading position in an international postwar art world. On radio and in print, Greenberg was the voice of 'the new American painting,' and a central figure in the postwar cultural history of the United States. Caroline Jones's magisterial study widens Greenberg's fundamental tenet of 'opticality'-the idea that modernist art is apprehended through 'eyesight alone'-to a broader arena, examining how the critic's emphasis on the specular resonated with a society increasingly invested in positivist approaches to the world. Greenberg's modernist discourse, Jones argues, developed in relation to the rationalized procedures that gained wide currency in the United States at midcentury, in fields ranging from the sense-data protocols theorized by scientific philosophy to the development of cultural forms, such as hi-fi, that targeted specific senses, one by one. Greenberg's attempt to isolate and celebrate the visual was one manifestation of a large-scale segmentation-or bureaucratization-of the body's senses. Working through these historical developments, Jones brings Greenberg's theories into contemporary philosophical debates about agency and subjectivity. Eyesight Alone offers artists, art historians, philosophers, and all those interested in the arts a critical history of this generative figure, bringing his work fully into dialogue with the ideas that shape contemporary critical discourse and shedding light not only on Clement Greenberg but also on the contested history of modernism itself.
ISBN: 0226409511
Publisher: University Of Chicago Press
Hardcover : 544 pages
Language: English
Dimensions: 7.1 x 9.8 x 0 inches