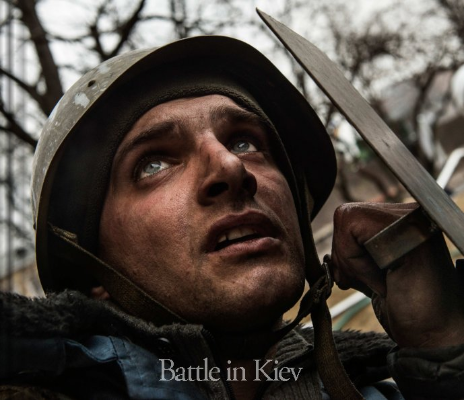 Battle in Kiev
by Giorgio Bianchi
In November 2013, hundreds of thousands of Ukrainian protesters took over Kiev’s Independence Square (Maidan Nezalezhnosti) and a number of important government buildings. Initially, the demonstrators gathered to protest against President Viktor Yanukovych’s decision to pull out of a deal that would have pushed Ukraine into isolation from the rest of Europe. After a brutal police crackdown the dissents grew in size and shifted their focus on toppling a government seen as brutal and corrupt. My photo reportage covers the period from 16th of February 2014 to early March, from the onset of the violent protests to the beginning of the Crimean crisis. Everything was wrapped in a persistent blanket of smoke rising from tyres being burned to prevent the advance of the Ukrainian president's feared Berkut special forces in their tortoise-formations. It was truly a territorial war as both sides fought to gain mere inches of ground around the government buildings . I witnessed the destruction of the barricades by the police and their subsequent rebuilding, higher and stronger than before, by the demonstrators. Tons of debris built up hour after hour in the streets only to be promptly gathered and piled up on the barricades by the thousands of protesters, who swarmed and rallied like ants defending their nest. By the end of 20th February the clash of sticks, iron bars and truncheons on shields gave way to the sharp, rhythmic shots of rifles trimming the protesters as they advanced towards the government buildings. Snipers struck down about seventy protesters, even though responsibilities are yet to be assigned. However that peak in violence marked a turning point in the story. Next morning the Berkut militia melted away and the police abandoned their posts. Only at that point there was a chance to mourn for the victims and for a slow return to everyday life.