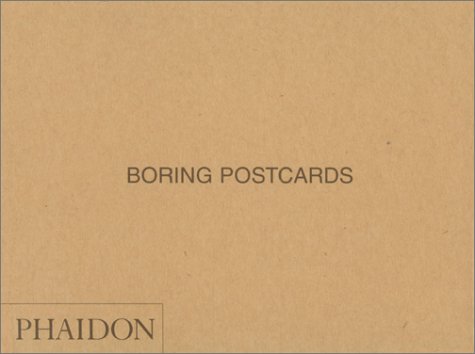 Boring Postcards USA
by Martin Parr
Publisher's Description
The joy of Parr's first collection of English postcards, simply entitled, Boring Postcards, was the absolute indistinctness of the imagery! A curve in the road (somewhere in the English countryside), a corner strip mall (devoid even of cars), and drab architectural interiors all filled that first volume--well here they are, except this time culled from American flea markets and pawn shops. A treasure trove for those with a healthy sense of fun! (How did we make it through those years?)
Amazon.com Review
You know those old postcards that show the local meatpacking factory in all its cinder-block glory or the sickening color scheme of a cheap '70s motel room? Well, here they are. Beginning with panoramas of highways in Ohio, Pennsylvania, New York, and other U.S. states, Boring Postcards segues to truck stops, restaurants, motor inns, malls, airports, military bases, factories, tools, and automobiles. Every image is certifiably boring, whether by dint of a photographer's ineptitude (dead-on views taken from too far away) or the sorry state of corporate architecture and interior design. And yet, as earnest advertisements for the American Way of Life, they all radiate a sunny faith in the uniqueness and desirability of whatever they portray.

There's not a word of commentary in this book, but that part is up to you. Certain things begin to stand out as you flip through the pages. Like the always blue skies. (Positive thinking!) Or the potentially interesting details that are uniformly obliterated, thanks to those polite middle-distance views and the muddy qualities of cheap lithography. There's a weird tension between the blandly generic ("Fine Food" reads the only visible sign atop a low-slung white building) and the proudly local (according to the postcard caption, this is "The famous Blue Grill on U.S. 40, St. Elmo, Ill."). In its silently subversive way, Boring Postcards proposes that we look more closely at this hallowed form of marketing to see what it tells us about the values and standards of mainstream American culture. --Cathy Curtis