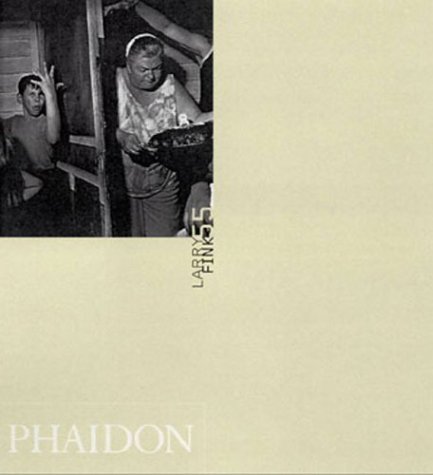 Larry Fink (Phaidon 55's)
by Laurie Dahlberg
Publisher's Description
Born in 1941, Larry Fink was a disaffected teenager in 1950s America on the cusp of radical social change. At art school his career as a photographer began to flourish. He spent the 1960s watching and learning from the prominent photographers of the time: Henri Cartier-Bresson, Robert Frank, W. Eugene Smith, and in many ways, his photographic aesthetic and rebellious spirit encapsulate the dramatic loss of innocence that the US underwent after the assassination of John F. Kennedy in 1963. Through his mother, he met Lisette Model, who would become his photographic mentor. Fink’s work draws heavily on the European tradition of photography of Brassaï and Kertesz and of the painters Georg Grosz and Otto Dix. Like these artists, Fink saught inspiration in what he considered a grotesque and sensuous theatre of life.

Consistent throughout all of his work is its central subject: the human body in action. Like Weegee before him, Fink was an interactive photographer, a ready witness to everyday drama. Always keen to infuse his photographs with social commentary, Fink would pursue socially and politically contentious imagery for the rest of his life, such as in the ‘black ties’ series and the Martin’s Creek series. He currently teaches photography at Bard College in New York where he has been teaching since 1994. This monograph on Fink provides a fresh, elegantly produced introduction to one of the leading figures in photography today.
ISBN: 071484022X
Publisher: Phaidon Press
Hardcover : 128 pages
Language: English
Dimensions: 8.4 x 9.6 x 0.5 inches