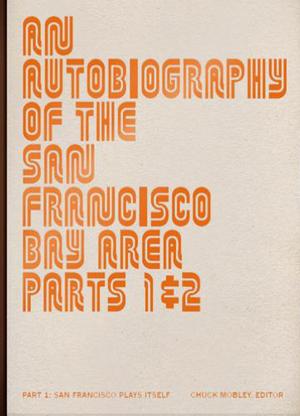 An Autobiography of the San Francisco Bay Area, Part 1: San Francisco Plays Itself
by Chuck Mobley, editor
San Francisco Plays Itself utilizes the notion of autobiography as a way to explore the work of contemporary artists who have engaged with the cultural and physical landscape of the Bay Area. Featuring more than 35 photographs by 31 artists, accompanying texts provide a contextualizing articulation by each artist of his or her work that serves to emphasize the autobiographical focus in egalitarian terms. The cumulative effect of these projects exemplifies the evolution of a specific time and place, while representing the unlimited experiences and possibilities of life in a major American metropolitan region. This catalogue was produced in conjunction with the SF Camerawork exhibition of the same title (September 10 - October 31, 2009).