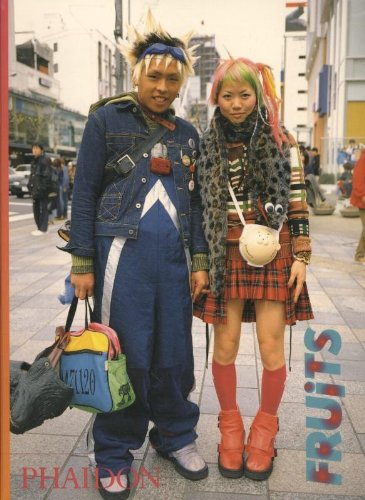 Fruits
by Shoichi Aoki
Publisher's Description
" 'Fruits' is a collection of Tokyo street fashion portraits from Japan's premier street fanzine of the same name. 'Fruits' was established in 1994, by photographer Shoichi Aoki, initially as a project to document the growing explosion in street fashion within the suburbs of Tokyo. Over the last five years, the magazine has grown to cult status and is now avidly followed by thousands of Japanese teenagers who also use the magazine as an opportunity to check out the latest styles and trends. The average age of the kids featured in the magazine is between 12 and 18, and the clothes that they wear are a mixture of high fashion...and home-made ensembles which when combined create a novel, if not hysterical, effect."-the publisher.
Amazon.com Review
If you ever wondered where the catwalk got its claws, then the portraits gathered in photographer Shoichi Aoki's book Fruits, from the streets of Harajuku in Tokyo, point the way to an extraordinarily imaginative and invariably stunning glut of mongrel fashion heists. A best-of collection from the fanzine of the same name, and published for the first time outside Japan, Fruits keeps its style clean: front-on, razor-sharp images, ranging from the deadpan to the manic, of the sharpest collages of sartorial influence that, usually, little money can buy. From off the peg to off the wall, kitsch to bitch, each person bears a combination and philosophy as distinctive as DNA. All shades of aesthetic are raided, with exquisite, scrupulous attention to detail. Punk is a favorite, as is, appropriately, Vivienne Westwood, alongside Milk and Jean-Paul Gaultier, and the occasional Comme des Garçons. Many of the outfits, though, are second-hand or self-assembly, such as a skirt drooping petals of men's silk ties, Wa-mono, when tradition Japanese clothes are topped with, say, an authentic bowler hat, EGL (elegant gothic Lolita), and a swathe of tartans, pinks, and turquoises. The most malleable feature, unsurprisingly, is hair, with dreadlocks, mohicans, back-combing, and crops dyed an irradiated spectrum. While the eye is drawn, obediently, to the mannequins, the background is often worth a look, either for the vending machines against which a number are shot, or the ubiquitous Gap store and bags, a constant reminder of the global mass market.

One enterprising man wears a genuine British paperboy's delivery bag, and, to pick but one profile, Princess, 18, is trying to be a doll and is currently preoccupied with body organs. Mmm. All the subjects are asked the source of their clothes, as well as their "point of fashion" and "current obsession." The scope for sociopsychological discussion is vast, particularly with the preponderance of infantilization, through dolls, bonnets, pop socks, and Barbie, but this is a joyous documentation of the innovative, celebrating the inspirational polytheism of street fashion, captured with provocative, political zeal. Best let the street cats prowl. --David Vincent