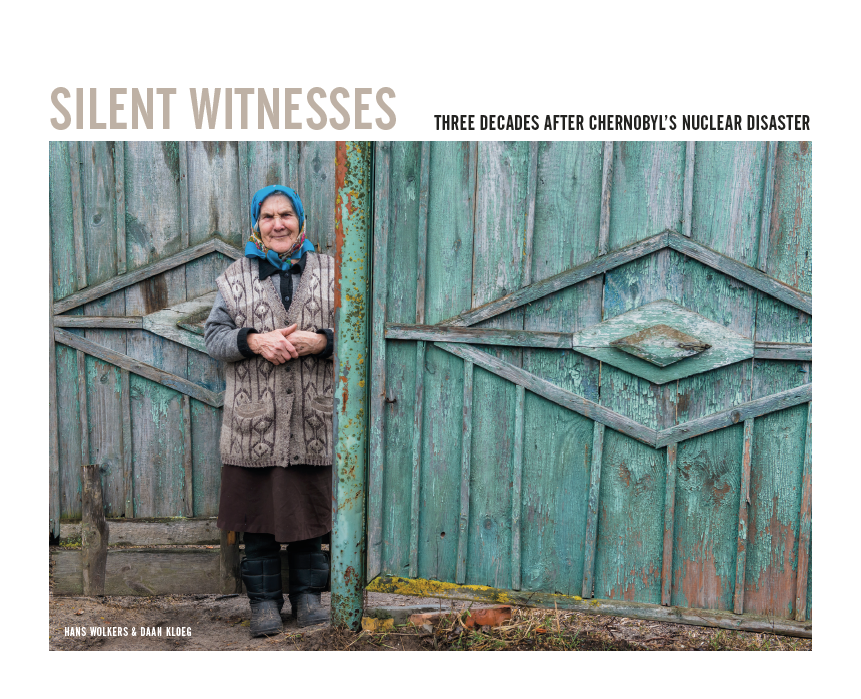 Chernobyl Witnesses
by Daan Kloeg & Hans Wolkers
Daan Kloeg en Hans Wolkers – Dutch and photographers and scientists – frequently visited the ‘death zone’ around Chernobyl’s exploded nuclear power plant. They talked to researchers, eye witnesses and victims of the disaster and photographed the devastated area. The result: a unique journalistic photo document, that gives a disturbing picture of the disaster’s consequences.

Great disaster In the middle of the night of April 26, 1986, reactor number 4 of Chernobyl's nuclear power plant exploded. Large amounts of radioactive material were released into the atmosphere and contaminated large areas of Western and Central Europe. In a radius of 30 kilometer around the reactor radioactivity was so high that the towns and villages had to be evacuated. Hundreds of thousands of people lost all their possessions, became ill or died.

Victims According to the initiators of the book project, a visit to the depopulated area around Chernobyl is a shocking experience. ‘Almost 30 years after the disaster, the area is still abandoned and ghost towns with collapsing houses dominate the area. Personal belongings bring the drama very close. A discolored photograph, a toy car, a headless doll... Silent witnesses of a tragedy that still continues’, says former CEO and author Daan Kloeg. In many areas around the reactor the Geiger counter shows sky-high values. Radioactive mud sticks under shoes, like a toxic monster. For example, in the abandoned city of Pripyat, close to the exploded reactor. Hot spots of radioactivity make every step risky. To this day, radioactivity still claims new victims, especially children. ‘Strangely enough, this place has also an almost serene beauty,’ says award-winning photographer and author Hans Wolkers. ‘Old houses with peeling paint, empty bottles where rays of sunlight playfully dance through the glass, and nature reclaiming gradually abandoned cities.’

Motherland Shortly after the disaster, a handful of people returned to their contaminated homes. These self-settlers insisted on returning to ‘motherland’, deliberately taking the risk of radioactive exposure. Like 83-year-old babushka Anna. She lives a simple life on her small piece of land. She inspired Kloeg and Wolkers to document the impact of the largest nuclear disaster in history. And to tell the story of a tragedy that still continues. ‘With the book sales, we want to show the consequences of the disaster, but also help the self-settlers’, says Kloeg. ‘We need everyone's help to make this a success, so we hope that people will buy the book.’