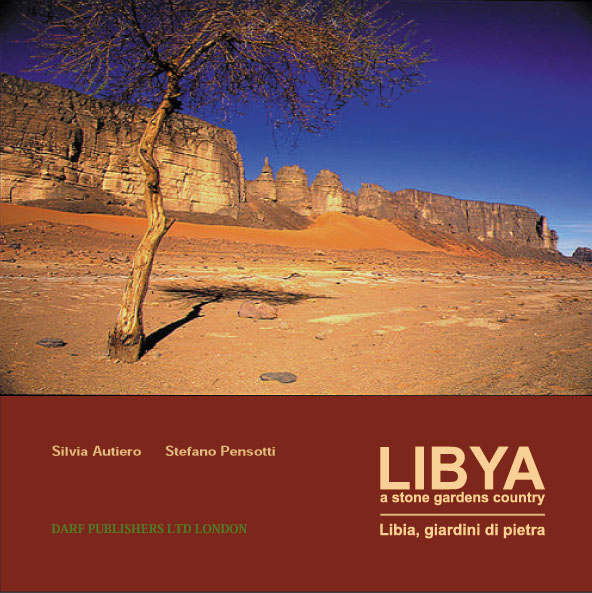 Libya, a Stone Gardens Country
by PENSOTTI - AUTIERO
Six in the evening. A road sign indicates Ghadames. “90 km left,” groans the driver. He’s tired out. The road is good and fast. “But it’s just for this reason” he explains. The desert is calm, stillness, reflection, a state of mind… going fast is wearisome. A freshly-painted green sign shows Ghadames. I ask him to stop. “What for? There’s nothing to take a picture of.” I don’t know, really I don’t know why I am touching the sign; it’s new, brand new. Suddenly I feel a deep, ancestral homesickness. “90 km only, Ali?” He is fed up and remains silent. I jump into the car. Ali Suliman doesn’t utter a word. “Ali?….Ali?…” I call him to no avail. He lives in Nalut, on top of the Jebel Nafusah, in the new town, naturally. The old town has been deserted. I happened to see it some hours ago, a short stop during our journey from Tripoli to Ghadames. Ali took me to the interesting ‘qsar’ , the fortified barns of the Berber. “You see this amphora?” he would keep on saying, “it’s here that cereals were kept.” It’s a place burdened with memories. The cells were set one on top of the other up to six high. “And these,” he was pointing at the wooden beams stuck in the clay, “these are the steps.” I’ve only been in Libya one day and I’m already overwhelmed with memories. When I was in Italy, I’d been told that Libya is a country of memories. I expressed my thought to Ali, while he was showing me the violet colour inside an amphora, and he seemed somewhat angry, according to my best interpretation of a desert man’s expression. “Nalut is not a memory,” he said without another word. I apologised, even though I didn’t understand why. Not yet: I would have understood in a few days. This was the subdued voice I had been hearing inside my head since I first stepped off the plane in Tripoli. Not that I needed to apologize, my most serene Ali. But now it’s late, we’d better go. “It’s that sign,” I continued. No matter how pedantic I might look, I wanted to shake off my homesickness. “What about that sign?” Ali pays attention to me again and adds, “It’s brand new”. I assumed that it was just the contrast between the new and the writing of Ghadames – the pearl, the mythic and desired oasis for so many caravans – that confused me. But was the contrast real? Ali would say no. It was only a sign, telling us that it was 90km to Ghadames, and we were going in the right direction. In addition, the sign was useful, the newer the better. I was sure Ali would have answered like that, instead, all of sudden he points to the clouds: “Look at them carefully, they are leaden, still. There is silence. It seems that the sky holds its breath”. I keep silent, listening too. Ali stops the car; he gets out and sits on the sand, his eyes staring beyond the horizon. I’m confused, even embarrassed. All around the silence, a prelude to something about to happen, I think for an instant. But then I understand that it is like a presence, the silence like life, like breath. The clouds were there, mute, icy, dark and heavy. I wish some thunder or lightning, would break that silence, which reverberated like a scream to me. It's sunset time in the desert: the echo of the sleeping giant is turning red, pink, blue. It's coming near. Listen before it fades and silently makes way for the night.
ISBN: 9781850772507
Publisher: Darf Publishers Ltd