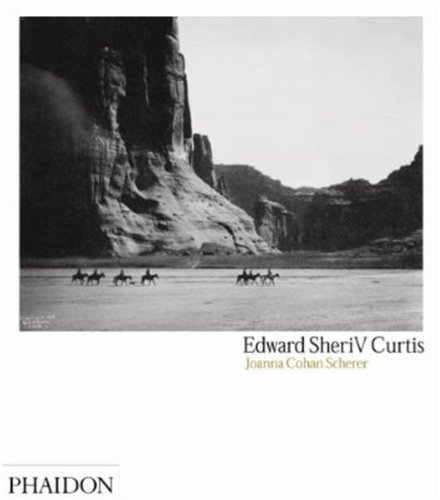 Edward Sheriff Curtis
by Joanna Cohan Scherer
Publisher's Description
Edward Sheriff Curtis (1868–1952) is one of the earliest successful portrait photographers, well-known for his remarkable archive of prints documenting the Native American people and their way of life in the late-nineteenth and early-twentieth century

This book is the best available introductory monograph to Curtis’s work featuring a series of 55 chronologically organised images from the range of Curtis’s body of work including his iconic and mesmerising images of Native American chiefs, pictures of men hunting and women at work on traditional crafts, beautiful American West landscapes, and classic examples of the studio portraits that were more typical of the Pictorialist photography of the period

One of the first visual anthropologists Curtis intended to photograph the Native American communities to document a ‘vanishing race’ but his real success lay in creating a powerful record of faces, time and place that transcend their original intention and still have significance as a body of work

His documentation of the Native American tribes was supported by President Theodore Roosevelt and financier J.P. Morgan and was published in several volumes as The North American Indian – a highly collectible body of work which remains of interest to anthropologists, historians and photographic enthusiasts and students today

The introductory essay is written by an expert on Curtis who provides a new perspective on his role in shaping the image of Native Americans in the twentieth century, as well as assessing his photographs in incisive picture-by-picture commentary.
ISBN: 0714841765
Publisher: Phaidon Press Inc.
Hardcover : 128 pages
Language: English
Dimensions: 10.2 x 0.8 x 11.6 inches