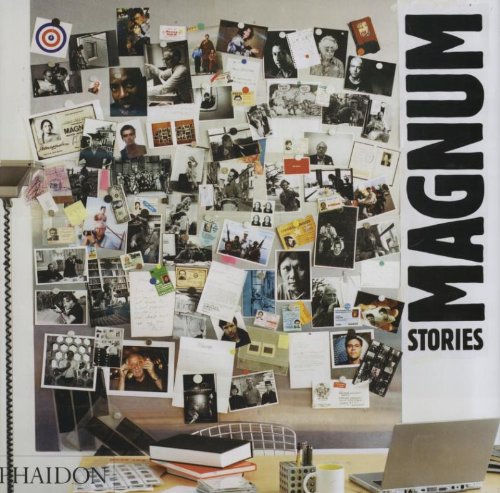 Magnum Stories
by Chris Boot
Publisher's Description
Amazon.com Review
Imagine having 61 widely published photographers from around the world candidly discuss their careers and beliefs while showing you key images from their portfolios. That is the engaging concept of Magnum Stories. From Iran-born Abbas (whose career began with a series about the Vietcong in the 1970s) to Patrick Zachmann (who has documented the lives of Malian immigrants in his native France), each photographer is given ample space to talk about his or her work. Editor Chris Boot accompanies the interviews with a brief explanation of the cultural or political background of each suite of images. The one thing the interviewees have in common is past or current membership in Magnum, a photographers' cooperative founded in 1947 by Robert Capa, Henri Cartier-Bresson and David Seymour as a means of breaking free from the editorial tyranny of Life and other photo-based magazines. Boot's introduction deftly summarizes Magnum's history and the practicalities of postwar photography. The presence of vintage "Magnum stories" by such photographers as Erich Hartmann ("Our Daily Bread") and W. Eugene Smith ("Country Doctor") adds a welcome historical dimension. While the founding generation were mostly photo-journalists who organized their images into visual "stories," today's members often pursue topics of personal interest with photographs that do not relate a straightforward narrative. These topics range from outlaw biker gangs in the U.S. (Dennis Stock) to the mountain peoples of Laos, Guatemala and Georgia (John Vink), from the tacky seaside resort of New Brighton in Liverpool, England (Martin Parr) to Siberian prison camps (Carl De Keyzer). With nearly 800 illustrations, this distinctive, square-format book offers a kaleidoscopic survey of the many faces of documentary photography. —-Cathy Curtis
ISBN: 0714842451
Publisher: Phaidon Press
Hardcover : 512 pages
Language: English
Dimensions: 11.4 x 11.5 x 2.1 inches