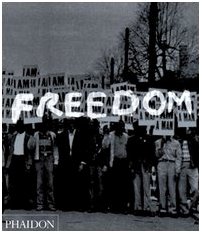 While the civil rights movement in America is officially recognized as the period between 1954 and 1968 (beginning' on May 17, 1954 when the Supreme Court outlawed segregation in public schools, through to the assassination of Martin Luther King, Jr. on April 4, 1968), the struggle actually began long before that. Slavery in the American colonies was protested against as far back as the seventeenth century, though it was not until the mid-nineteenth century that the resistance built momentum. This photographic journey of the African American struggle for equality begins with abolitionists like Harriet Tubman, who escaped slavery in 1849 and then helped others to freedom, and continues to the present. Freedom chronicles the battle to eradicate slavery through the Civil War (1861-5) and, once slavery was officially outlawed, it traces the evolution of its dual legacy - segregation and racism. The struggle for equal rights involves small acts of personal bravery and sweeping proclamations of legal and moral import; it is the stuff of economics, war, tradition, despair, politics, hope, activism, vigilance and violence. It engages black and white, heroes and the unheralded, public acts of protest and private moments of introspection.

Manning Marable is a prominent voice on the history of race in America. He is the Founding Director of the Institute for Research in African American Studies at Columbia University in New York City, and is the author of more than fifteen books on the subject, including the highly acclaimed Black Leadership.

Leith Mullings is Presidential Professor of Anthropology at the Graduate Center of the City University of New York and the author of many books on African American communities. She co- edited with Marable an anthology of African American texts, Let Nobody Turn Us Around.
ISBN: 0714842702
Publisher: Phaidon Press
Hardcover : 512 pages
Language: English
Dimensions: 10.1 x 11.5 x 2 inches