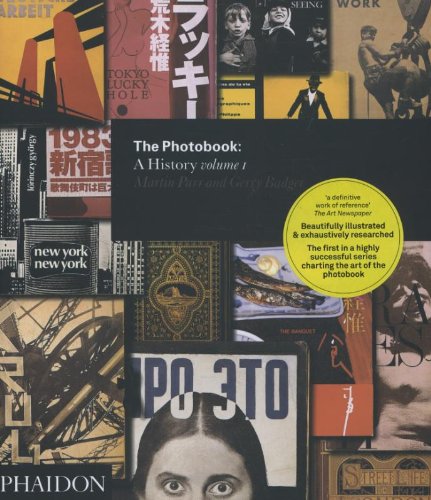 The Photobook: A History, Vol. 1
by Martin Parr
Publisher's Description
Amazon.com Review
From Street Life in London to Hiroshima, from The Royal Mummies to Perspective of Nudes and The Sweet Flypaper of Life, photobooks encompass a tremendous diversity of subjects and styles. While some of these illustrated volumes are famous (Eadweard Muybridge's Animal Locomotion, Robert Frank's The Americans), many others are known only to specialists. The Photobook: A History offers an engrossing survey of this art form, beginning with early experiments in photography in mid-19yh-century England and ending with raucous Japanese photo-diaries of the 1990s. The scope of this handsomely designed book—the first of two volumes—is so broad that only a few pages of each photobook could be illustrated, and some of the 750 color and black-and-white reproductions are quite small. But the incisive commentary by British photographer Martin Parr and photo critic Gerry Badger opens up new worlds of visual information. The authors provide essential grounding, not only in the history of photography, but also in the artistic and social movements that influenced the look and content of photobooks. In the 19th century, the object was to collect and to classify, whether the subject was a foreign landscape, a war, the surface of the moon or the manufacture of bread. Conversely, 20th-century photobooks are often frankly subjective, drawing on movements ranging from surrealism to the Beats. Yet a quasi-scientific approach could result in poignant imagery (as in Facies Dolorosa, a study of the faces of seriously ill people), and artistic subjectivity could yield bitter truths (Helen Levitt's A Way of Seeing, images of poor children in New York). Describing photobooks of the polemical 1930s as "the great persuaders," Parr and Badger remark that the best documentary work demonstrates an awareness of the ambiguities and contradictions inherent in the medium. Although we tend to think of propaganda solely as the product of totalitarian regimes (see "Long Live the Bright Instruction," a Chinese tract featuring unnervingly happy workers), the authors remind us that photobooks celebrating the American way of life often naively ignored the complex socio-political forces that underlie a sentimental or cheerful scene. The final chapter, devoted to postwar Japanese photobooks, vividly illuminates the cocktail of hedonism, rage and despair that makes these volumes extraordinary visual documents. --Cathy Curtis
ISBN: 0714842850
Publisher: Phaidon Press
Hardcover : 320 pages
Language: English
Dimensions: 10.4 x 11.9 x 1.5 inches