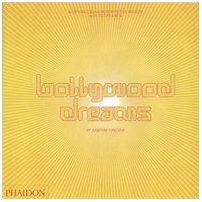 Bollywood Dreams
by Jonathan Torgovnik
Publisher's Description
Deriving its name from its American equivalent, Bollywood is the highly successful Indian movie industry predominantly based in Bombay and Madras. Every day more than 14 million people go to the cinema across India to watch films produced by this massive and powerful industry. In India, movies are not just a form of entertainment, it is practically a religion. Streets in major Indian cities are lined with colourful posters of Indian movies and their stars. Movie stars are treated like demi-gods, no match even for American standards of celebrity obsession. More than any other cultural or political institution of the 20th century, the cinema has captured the hearts and minds of India`s growing population of almost one billion even against the stark backdrop of the vast country`s struggle with poverty and hunger and often tense Muslim-Hindu relations. The experience of actually going to the movies in India is as much a part of the Bollywood phenomenon as are the stars themselves and Bollywood Dreams documents this important aspect of understanding the important role Bollywood plays in contemporary Indian culture. 'Going to the cinema,' Torgovnik says 'is about going to see the actors larger-than-life. It is about living the glamorous life for a few hours and leaving your daily hardships behind.' Once inside the movie theatres, the audience can expect at least three hours of entertainment including several song and dance numbers, love scenes, action sequences, and most surely a happy ending. Each film includes the necessary ingredients for success: action, violence, music, dance, romance, and morals. The themes of the movies are often social issues like communalism, ethnicity, religion, and caste, and the movie theatres themselves are often fill of lively interaction between viewer and star. Cheers and boos pervade the atmosphere: the audience becomes a part of the film, and likewise, the film becomes a part of them. Bollywood Dreams begins with a vignette of the touring caravans that bring Bollywood on the big screen to India`s villages in portable tents. We then follow the Indian film from its creation on the movie set, to the larger-than-life stars, directors, and character actors, to the editing chamber, to the city streets where ubiquitous promotional posters abound, and finally, to the multitude of movie theatres that abound in India.
ISBN: 0714843075
Publisher: Phaidon Press
Hardcover : 120 pages
Language: English
Dimensions: 11.1 x 11.1 x 0.7 inches