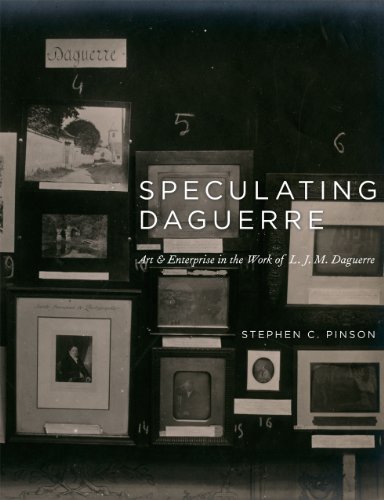 Speculating Daguerre: Art and Enterprise in the Work of L. J. M. Daguerre
by Stephen C. Pinson
Publisher's Description
Louis Jacques Mandé Daguerre (1787–1851) was a true nineteenth-century visionary—a painter, printmaker, set designer, entrepreneur, inventor, and pioneer of photography. Though he was widely celebrated beyond his own lifetime for his invention of the daguerreotype, it was his origins as a theatrical designer and purveyor of visual entertainment that paved the way for Daguerre’s emergence as one of the world’s most iconic imagemakers.

In Speculating Daguerre, Stephen C. Pinson reinterprets the story of the man and his time, painting a vivid picture of Daguerre as an innovative artist and savvy impresario whose eventual fame as a photographer eclipsed everything that had come before. Drawing upon previously unpublished correspondence and unplumbed archival sources, Pinson mixes biography with an incisive study of Daguerre’s wide-ranging involvement in visual culture. From his work as a commercial lithographer to his coinvention of the Paris Diorama—a theater in the round in which Daguerre employed natural light and special effects to simulate time and movement in large-scale paintings—here we are given access to Daguerre the artist, whose tireless experimentation, entrepreneurial spirit, and exceptional talent for popular spectacle helped to usher in a new visual age.

Filled with more than one hundred illustrations and including the first complete catalogue of Daguerre’s paintings, works on paper, and daguerreotypes to appear in print, the publication of Speculating Daguerre will be a much-heralded event for anyone with even a passing interest in one of the most fascinating characters in the history of photography.
ISBN: 0226669114
Publisher: University Of Chicago Press
Hardcover : 424 pages
Language: English
Dimensions: 8 x 11 x 1 inches