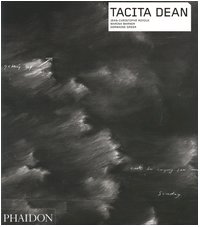 Tacita Dean (Contemporary Artists)
by Jean-Christophe Royoux
Publisher's Description
TACITA DEAN by Jean-Cristophe Royoux, Germaine Greer and Marina Warner, is the first major monograph to cover the work of this internationally respected artist. An unusual artist, known to use several artistic mediums at once, Tacita Dean is among the most sophisticated new artists working today. Born in England but currently working in Berlin, she is a truly international innovator. Although she emerged in the 1990s, Dean has a quiet depth that sets her apart from the hype of the `cool Britannia' scene. Dean's unique creations reveal her inquisitive, almost detective-like, interest in life's most dramatic and mundane moments.

Her film installations explore the ways that change and coincidence influence daily life. In Disappearance at Sea (1996), Disappearance at Sea II (1997) and Teignmouth Electron (2000) Dean documents the tragic account of Donald Crowhurst and his attempt to fake a solo voyage around the globe, which culminated in his eventual loss of sanity and his death at sea. Dean's photography collections and collages, such as FLOH (2002), reveal Dean's impulse to archive forgotten fragments of history. Her other works exemplify her exceptional creative eye, like that of a jukebox filled with ambient sounds recorded around the world on the eve of the new millennium (Jukebox, 2000), or the rotating view of Berlin form the Fernsehturm television tower (Fersehturm, 2001) and a frustrated attempt to follow directions to Robert Smithson's submerged Spiral Jetty in Utah's Great Salt Lake (Trying to Find the Spiral jetty, 1997).

Dean's work is as diverse as it is unique and has attracted the attention of galleries from around the world as well as international exhibitions such as the Venice Biennales (2003 and 2005). Her films have been screened at the Sundance Film Festival and she was nominated for the Turner prize in 1998. TACITA DEAN is a comprehensive overview of this international artist and is perfect for students, collectors and anyone with an interest in contemporary art.
ISBN: 0714844284
Publisher: Phaidon Press
Paperback : 160 pages
Language: English
Dimensions: 10 x 11.5 x 0.7 inches