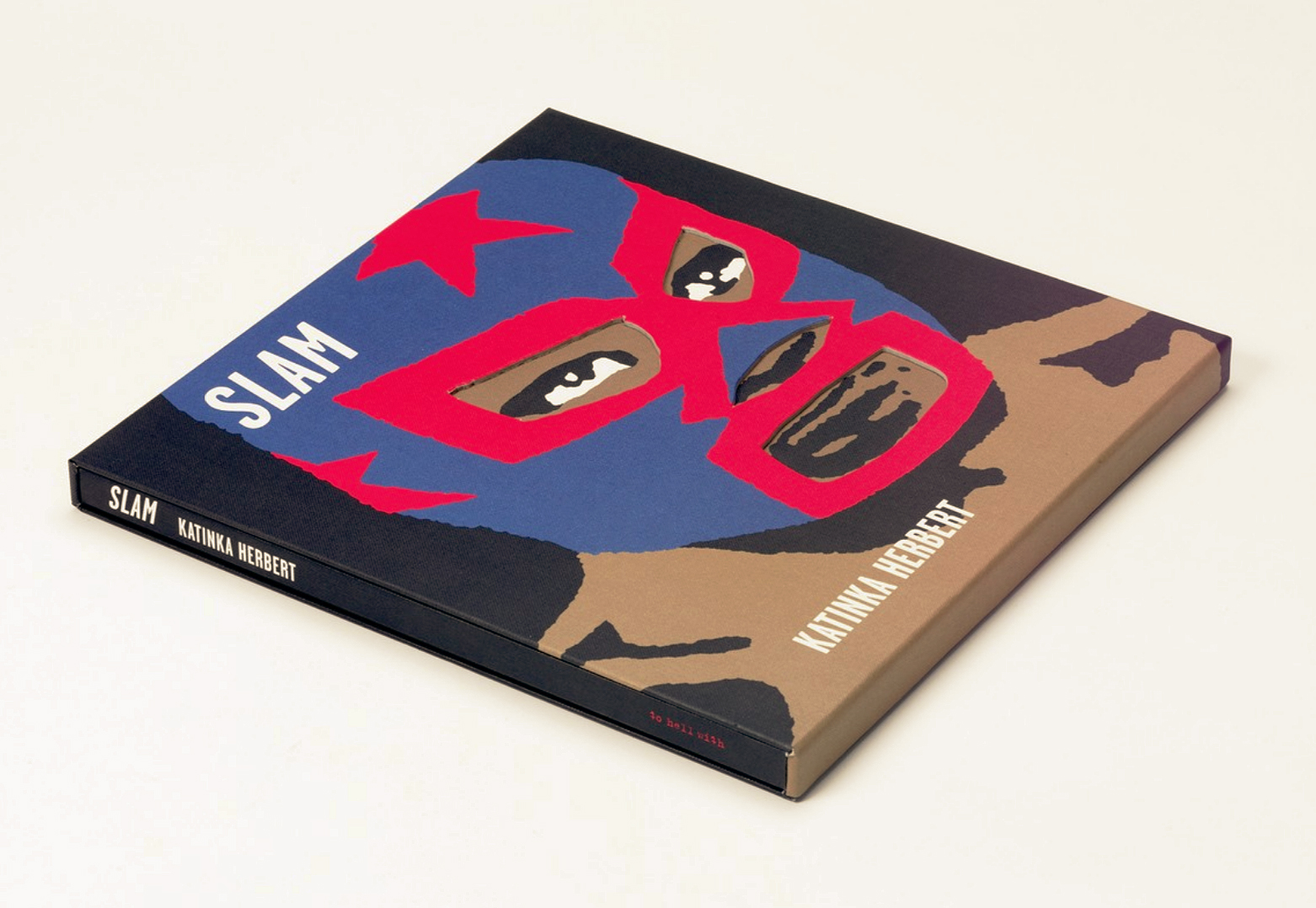 SLAM Lucha Libre Superheroes Of The Ring
by Katinka Herbert
SLAM Lucha Libre Superheroes Of The Ring INFLUENCE (Foreword from SLAM) ‘A less than holy upbringing brought me to the theatrical world of Mexican Luchadores. With a father in the film industry and a sister in the circus I grew up amongst circus freaks and soft porn flicks as well as idolising characters such as Evel Knievel’ As a kid, my Saturday afternoons were all about watching Kendo Nagasaki, Giant Haystacks and of course Bid Daddy wrestle on tv. I felt Kendo Nagasaki played a part in drawing me into the sport. Wearing a mask is part of his identity and he has been involved in the world of Luchadores, so was the perfect link between UK wrestling and Mexico’s Lucha Libre. Kendo agreed to write the foreword for SLAM. His first hand experience of both UK and Mexican wrestling is unique and his piece he wrote for the book, invaluable.

INSPIRATION AND SLAM Luchadores inspire me as athletes and entertainers. Wearing the masks propel them to Superhero status amongst their Mexican fans, giving them a larger-than -human appeal. The fighter behind the mask is unrecognisable, a new identity can be created. They can also become whoever you wish them to be. The Lucha mask is a symbol of strength and empowerment in the Mexican culture, dating back to the days of the Aztecs. I embarked on a journey to track down and document the Luchadores. There was very little reference material available, online or in books and virtually no images of the wrestlers outside of the ring. During my trips to Mexico spanning eight years, I stood ringside at Arena Mexico, The Coliseo, and smaller rings throughout the country, gaining their trust and photographing the fights, dodging the Luchadores as they flew above my head, out into the audience. I watched them train in their gyms, and spent time with the very young generation of Luchadores, tackling complicated series of gymnastic moves, in preparation for their careers ahead of them. Many of them choose wrestling as their career path from a young age, the grueling and relentless training is an inspiration in itself. For most Luchadores, wrestling has given them a career that opens up a world of opportunities. For many of the wrestlers, being photographed in the ring was acceptable, but to be asked to do a shoot on location, to be shot masked, driving a 70’s muscle car or at home in a domestic setting, was an alien concept. My aim was to capture these super-human legends, these heroes and heroines of the people, in settings that also celebrated their day-to-day lives, without stripping away their status.

FROM KENDO NAGASAKI’S FOREWORD SLAM is a unique and valuable collection of portrait photographs of Mexican Lucha Libre Superheroes, exhibiting the diversity of this fascinating theatrical combat culture. Each of Katinka Herbert’s stunning photographs places the subject in a fine art context, the perfect canvas upon which to showcase the richness and diversity of the exquisite theatre of wrestling – I heartily commend it to you.

SLAM – the BOOK Renowned photographer, Katinka Herbert, is obsessed with men in tights and masks and has spent the last 8 years traveling backwards and forwards to Mexico documenting the finest examples. Finally they have all been captured by her lens and comprehensively collected in “Slam: Lucha Libre Superheroes of the Ring”. Katinka has immortalised the icons of the genre: El Hijo Del Santo, aka El Enmascarado de Plata (The Man in the Silver Mask) and Blue Demon Jr; the goodies aka tecnico luchadores, usually the good guys armed with sophisticated, silky skills; the nasties, or rudo luchadores, usually the villainous, aggressive, less cultured warriors; the cross-dressing exoticos exempli ed by the self- styled Queen of the Ring, Cassandro, in his perfumed and primped pomp; the mini-stars mini estrellas as well as female wrestlers known as Luchadoras. Part art book, part fun book and in total a labour of love: Slam: Lucha Libre Superheroes of the Ring. The book has been beautifully designed by the renowned design group, FUEL. Featuring a die-cut slipcase printed with a striking graphic illustration of a masked Mexican wrestler, the image on the book inside reveals the another wrestler wearing a different mask.
ISBN: ISBN: 978-0-9554609-5-1
Publisher: To Hell With Publishing