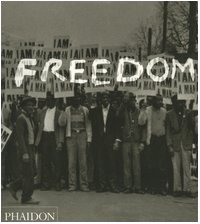 Slavery in American colonies was protested against as far back in time as the seventeenth century, though it was not until the mid-nineteenth century that the resistance built momentum. This photographic journey of the African American struggle for equality begins with abolitionists like Harriet Tubman, who escaped slavery in 1849 after which he was able to help others to freedom, and continues to the twenty-first century. Freedom chronicles the battle to eradicate slavery throughout the Civil War (1815), with profound sensitivity and acute attention to detail. Accordingly, it traces the evolution of the dual legacy of slavery - segregation and racism - after its official prohibition.

The struggle for equal rights involved countless small acts of personal bravery and sweeping proclamations of legal and moral import. It is the stuff of of hope and despair, vigilance and violence - realized in an arena of economics, politics and war. It engages black and white, the heroes and the unheard, public acts of protest and private moments of introspection in a world that is unforeseeably challenging.