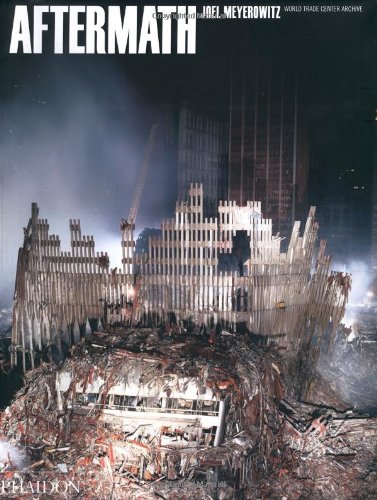 Aftermath: World Trade Center Archive
by Joel Meyerowitz
Publisher's Description
Amazon.com Review
After September 11th, 2001, the Ground Zero site in New York City was classified as a crime scene and only those directly involved in the recovery efforts were allowed inside. The press was also prohibited from the site, but with the help of the Museum of the City of New York and sympathetic city officials, award-winning photographer Joel Meyerowitz managed to obtain unlimited access. By ingenuity and sheer determination, he was the only photographer granted unimpeded right of entry into Ground Zero.

For 9 months, during the day and night, Meyerowitz photographed "the pile," as the World Trade Center came to be known, and the over 800 people a day that were working in it. Influenced by Walker Evans and Dorothea Lange's work for the Farm Security Administration during the Great Depression, he knew that if he didn't make a photographic record of the unprecedented recovery efforts, "there would be no history."

Marking the 5th anniversary of September 11th, Phaidon Press has published this extraordinary new book AFTERMATH: THE WORLD TRADE CENTER ARCHIVE with photographs and text by Joel Meyerowitz, which will feature, for the first time, the vast collection of Meyerowitz’s previously unpublished photos from Ground Zero along with the engaging account of his experience in his own words. This historic publication is the only existing photographic record of the monumental recovery efforts post-9/11.

From portraits of the people he met to the accidental beauty of the ruins at dusk, AFTERMATH features 400 breathtaking color photographs, many taken with a large format camera. Bronx-born Meyerowitz brings his trademark sensitivity, intelligence and eye for beauty to these poignant images that will hold an important place in American history.

AFTERMATH brings to life the tireless determination of the scores of individuals who assisted in the clean-up process, including construction workers, police officers, firefighters, welders or "burners," engineers, crane operators and volunteers. Presented on a monumental scale, and interspersed with fascinating stories, the book documents the transformation of the site chronologically from piles of devastation to an empty pit six stories below ground. This landmark book offers current and future generations the opportunity to finally travel inside a forbidden city where thousands were brought together by a common cause.

The World Trade Center Archive, consisting of thousands of Meyerowitz's images, is part of the permanent collection of the Museum of the City of New York where it is available for research, exhibition and publication. For the past few years, a small selection of these photographs was featured in an exhibition, "After September 11: Images from Ground Zero," which traveled to more than 200 cities in 60 countries, reaching over 3.5 million people.