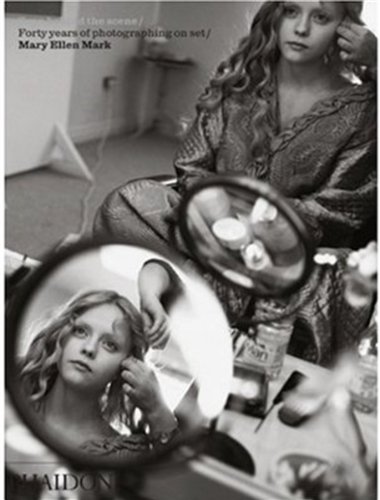 Seen Behind the Scene (Photography)
by Mary Ellen Mark
Publisher's Description
Seen Behind the Scene includes beautiful and engaging portraits, documentary pictures that reveal the way a film is made, dramatic moments in direction, and amusing photos that reveal the camaraderie on set - such as Henry Fonda making faces behind Katharine Hepburn, well-known prankster Jack Nicholson turning Stockard Channing upside down, and Dustin Hoffman causing a lot of amusement in his female costume between scenes on the set of Tootsie.

The text for the book comes from a number of high profile actors, directors, and film industry professionals who complete this picture of life 'behind the scenes' by sharing their anecdotes and thoughts about their profession. Among these engaging texts, cinematographer Giuseppe Rotunno remembers how Fellini fled in fear of the white horse in Satyricon, Sofia Coppola recalls growing up on set with her father, and Helen Mirren eloquently describes the disconcerting experience of night shoots to complete this insight into the world of filmmaking.

Since the 1960s Mary Ellen Mark has worked on over 100 film sets as a 'special stills photographer', making thousands of documentary photographs of life behind the scenes, rather than conventional still photographs made of actors on camera. This exciting new book presents the best of her images ranging from the first films that Mark shot in the 1960s, such as Fellini's Satyricon, to legendary 1970s productions like Francis Ford Coppola's Apocalypse Now and Milos Forman's One Flew Over the Cuckoo's Nest, as well as films from the ensuing decades, ranging from Network to Tootsie, from Gandhi to Showgirls. She continues to work on film sets and over the last decade has photographed recent Oscar-winning productions such as Baz Luhrmann's Moulin Rouge, Alejandro González Iñárritu's Babel, and Tim Burton's Sweeney Todd: The Demon Barber of Fleet Street.

Over her career, Mark has been given unprecedented access to the film sets she has worked on, roaming freely among cast and directors, and photographing in make-up, during rehearsals, on the set, and off the set to provide a full picture of life behind the scenes. Her experience over the last forty years reveals much about the changes in filmmaking. She recalls in her introduction how she loved to photograph the director's reaction and interaction during rehearsal when he was behind the camera; but now in contemporary filmmaking the director is nowhere near the camera, but rather in front of a video monitor away from the set. Her iconic 1960s portraits of Fellini behind his camera fix this moment in film history and are evidence of the changes in technology.

Mark's portraits from the 1960s, 1970s, and 1980s reveal the changing nature of celebrity. When she first started working, Mark would be just another person on the set with full access to every cast member. With the rise of the massive power and impact of celebrity, it has become much more difficult for photographers to work on sets, when actors are constantly surrounded by an entourage of publicists, agents, and assistants. Their schedules are carefully planned down to the minute, and it is harder for a photographer to gain access to them. Therefore, Mark's more recent candid photos of major celebrities, such as Cate Blanchett, Brad Pitt, Johnny Depp, and Nicole Kidman, are rare and particularly special.
ISBN: 0714848476
Publisher: Phaidon Press Inc.
Hardcover : 264 pages
Language: English
Dimensions: 8.6 x 11.5 x 1.3 inches