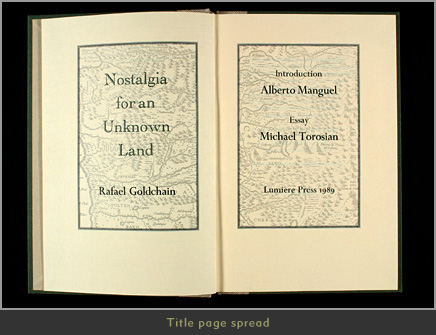 Nostalgia for An Unknown Land
by Rafael Goldchain
Devoted to the photographic work of Rafael Goldchain, the title echoes the artist's personal odyssey in search of his Latin American heritage. The result, however, is not simply a document of a land, but a fabrication woven from threads of history, myth, popular culture and politics - a revelation of the artist's vision of a rediscovered world.

The photographic portfolio of twelve colour plates is introduced by noted anthologist and author Alberto Manguel and accompanied by an essay by photographer and publisher Michael Torosian.

Rafael Goldchain has been the recipient of the Duke and Duchess of York Photography Prize and the Leopold Godowsky Jr Award in Colour Photography. Goldchain's work is in a number of public collections including: The Museum of Modern Art, New York; The Canadian Museum of Contemporary Photography; Museum of Fine Arts, Houston; and the Winnipeg Art Gallery.

Composed in Linotype Granjon with Perpetua and Cochin Open for display and printed on mould-made Frankfurt cream paper. The twelve four-colour reproductions have been printed on Phoenix Dull paper, varnished and tipped in. Quarter bound in natural linen and Canson "ocean green" paper over boards. Forty-seven pages, 6 x 9 inches. Edition 170. September 1989. Signed by the photographer and authors.