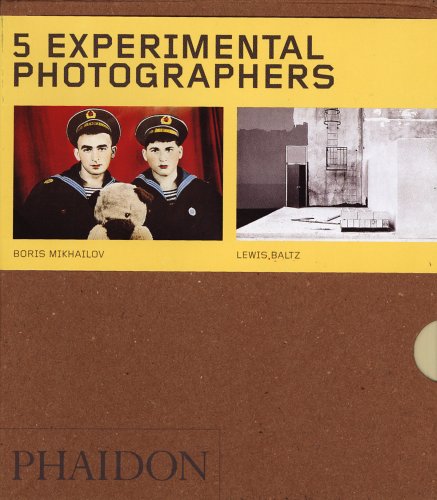 Experimental Photographers - Box Set of 5 (55 Series)
by Editors of Phaidon Press
Publisher's Description
• A new collection of pocket sized photography books representing fabulous value
• Five books for the price of three, presented in a specially designed slipcase
• A unique selection of books on five of the greatest innovators of photography of all time, featuring:

Christian Caujolle is a critic, a writer of several photographers’ monographs and Director of the Paris photographic agency VU
Jeannine Fiedler is an art historian and critic, and was a guest curator at the Bauhaus-Archiv Berlin from 1986 to 1990 and author and editor of a number of books, including Paul Outerbridge Jr (1993) and Bauhaus (1999)
Kazuo Nishi is a film and photography critic, and was Editor-in-Chief of the Japanese photography magazine Camera Mainichi from 1983 to 1985, and author of several books, including Why Still ‘Provoke’ Now? (1996)
Paul Hill is a writer on photography and lecturer on the life and work of Eadweard Muybridge
Eugenia Parry is a writer and lecturer on 19th-century and contemporary art and photography
ISBN: 0714853690
Publisher: Phaidon Press
Paperback : 640 pages
Language: English
Dimensions: 5.4 x 6.4 x 2.2 inches