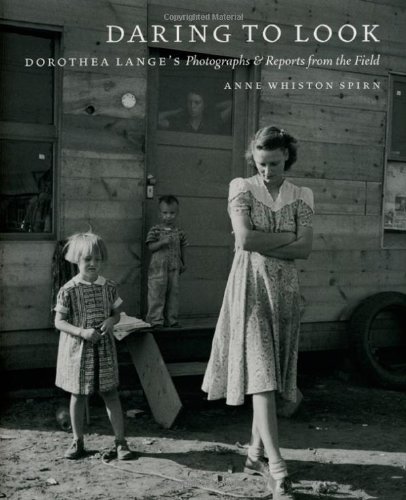 Daring to Look: Dorothea Lange's Photographs and Reports from the Field
by Anne Whiston Spirn
Publisher's Description
Near the end of her career, Dorothea Lange lamented, “No country has ever closely scrutinized itself visually. . . . I know what we could make of it if people only thought we could dare look at ourselves.” Lange, however, did look, unflinchingly turning her lens on the despair, degradation, and greed unleashed by the Great Depression, and her photographs for the New Deal’s Farm Security Administration have become the defining images of that time, capturing a country and a people on the brink of cataclysmic change.

But the iconic images we all know don’t come close to telling the whole story. Lange viewed her photographs as part of sequenced narratives, contextualized and enriched by her descriptive captions—without which, she wrote, “half the value of fieldwork is lost.” Daring to Look presents never-before-published photos and captions from Lange’s fieldwork in California, the Pacific Northwest, and North Carolina during 1939. Lange’s images of squatter camps, benighted farmers, and stark landscapes are stunning, and her captions—which range from simple explanations of settings to historical notes and biographical sketches—add unexpected depth, bringing her subjects and their struggles unforgettably to life, often in their own words.

When Lange was dismissed from the Farm Security Administration at the end of 1939, these photos and field notes were consigned to archives, where they languished, rarely seen. With Daring to Look, Anne Whiston Spirn not only returns them to the public eye, but sets them in the context of Lange’s pioneering life, work, and struggle for critical recognition—firmly placing Lange in her rightful position at the forefront of American photography.
ISBN: 0226769844
Publisher: University Of Chicago Press
Hardcover : 376 pages
Language: English
Dimensions: 9 x 11 x 1.1 inches