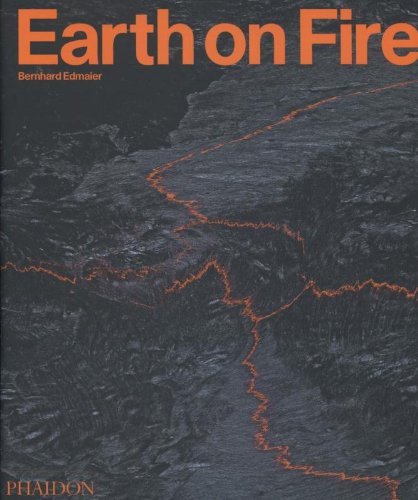 Earth On Fire: How Volcanoes Shape Our Planet
by Bernhard Edmaier
Publisher's Description
Every time a volcanic eruption hits the headlines, we are reminded of the fact that we live on a ball of fire, with only a thin layer of rock separating us from the furnace deep inside our planet. Volcanoes serve as the earth's vents, opening up when the pressure of magma trying to rise to the surface from the depths of the planet gets too strong. But lava-spewing mountains aren't the only evidence of the heat and activity inside the earth: there are also geothermal areas with hot springs and bubbling mud pools, steaming acid lakes in often perfectly circular craters, as well as encrustations of bright yellow sulphur crystals and multi-coloured landscapes that owe their many hues to a wide variety of minerals. Huge cracks in the earth, many kilometres long, are also the result of volcanic activity, as are the vast mountain ranges that have formed over millions of years on the bottom of the ocean, where 80 per cent of magma emerges. Atolls grow on the eroded cones of once-active volcanoes that have gradually disappeared underneath the surface of the sea, while the black sand found on the beaches of volcanic islands simply consists of lava rocks that have been ground down by the waves. About ten per cent of the world's population live near an active volcano, and people have long been fascinated by the these awe-inspiring but devastating forces of nature, without knowing what causes them. Plato thought that volcanic eruptions were the result of battles being fought between the elements of earth, fire and air, while Aristotle's theories on the subject involved underground winds set alight by pitch and brimstone burning in the earth's core. Mountains have been erupting since the beginning of time, but vulcanology is a very young science - the theory of plate tectonics (the study of the structure of the earth's crust) dates from the 1960s. In clear, accessible texts, geologist Angelika Jung-Huttl explains the phenomena and formations seen in Bernhard Edmaier's photographs, starting with a 1,500 word introduction that describes the distribution of volcanoes around the earth, and explains why they are where they are. This introduction is illustrated with a map showing outlines of tectonic plates and volcanic belts around the world, as well as the location of volcanoes featured in the book. Arranged geographically by tectonic plate region, the book's five image sections explore volcanic formations around the globe - from those we may know well, like Mount St Helens in the US and Mount Etna in Italy, to the most remote volcanic landscapes in Ethopia, Siberia, and the Maledives. All the large format images in this sections are accompanied by brief descriptive captions. The large-scale images are followed by an informative section looking at specific geothermal phenomena in more detail, made up of ten focus study texts accompanied by one or two graphics or illustrations and additional smaller photographs. This book also includes a glossary and an index.
ISBN: 0714857009
Publisher: Phaidon Press
Hardcover : 220 pages
Language: English
Dimensions: 3 x 9 x 9 inches