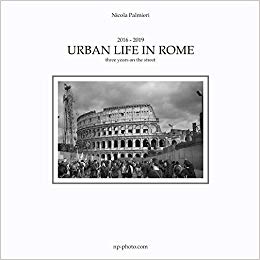 Urban Life in Rome
by Nicola Palmieri
In this volume a photographic documentation of about 140 color shots has been collected that tell the life in the streets of Rome in the first three years of the author's stay in the city. They are images of everyday urban life set in the frame of a wonderful city. Scrolling through the volume, we will encounter, starting in 2016, images that materialize daily in the capital where the large amount of marbles, domes, combined with characteristic colors such as ocher, orange and gray travertine combine to create beloved scenarios all over the world. For example you will be able to admire the people who flock to the Pincio terrace, the boys who play throwing snowballs in the square of the Colosseum, the walks in the rain among the ancient holes, the crowd for Christmas in Via dei Condotti ... The first four chapters are dedicated to street photographs, one for each year, while the last one is dedicated to classic photographs, more technical photos that could be described as postcard like the dawn on the Imperial Forums, the sunset over San Pietro or piazza of Spain at the first light of morning completely deserted.
ISBN: 9788831615389
Publisher: youcanprint