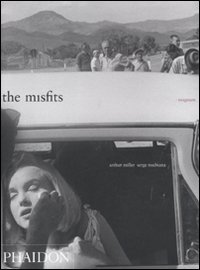 The Misfits
by Serge Toubiana
Publisher's Description
This book tells the story in pictures and words of the making of the legendary film The Misfits (1961), directed by John Huston and starring Marilyn Monroe, Clark Gable and Montgomery Clift.

The film concerns an ex-stripper and recent divorcee, Roslyn Taber (Monroe) in Reno, Nevada, who falls in love with an aging cowboy, Gay Langland (Gable). Langland, a rugged individualist, teams up with a worn-out rodeo rider Perce Howland (Clift) to round up a herd of wild ‘misfit’ horses. Roslyn is shocked to learn that the horses will be slaughtered and made into dog food. She attempts to persuade Langland to call off the roundup. When he refuses, she successfully appeals to Perce to release the horses that have already been captured. This infuriates Langland, who recaptures the leader of the horses after a rough struggle. Proving that he is the boss, he then decides to let the horses go free. The roundup ends as a financial failiure, but from the ordeal Roslyn and Langland make a new start together.

The Misfits was made in notoriously difficult circumstances. Marilyn Monroe was suffering a mental breakdown and was drifting apart from her husband, the playwright Arthur Miller (who had written the film to help her realise her ambition to be a ‘serious’ actress); Clark Gable was seriously ill; Montgomery Clift was heavily dependent on drink and drugs. Shooting conditions in the Nevada desert were atrocious. The production nearly doubled in length and cost. Remarkably, however, the result was elegiac, moving film that became a fitting swansong for Gable and Monroe (neither made another film: he died a few days after shooting was completed; she overdosed a year later).

As part of the promotional strategy for the film, the Magnum photographic agency was given the exclusive right to take photographs during the shooting. (The Magnum connection even featured on one of the posters for the movie.) Nine of its most famous photographers (Eve Arnold, Cornell Capa, Bruce Davidson, Henri Cartier-Bresson, Elliott Erwitt, Erich Hartmann, Inge Morath, Dennis Stock and Ernest Haas) covered the production, both on and off the set. Their pictures are both a fascinating documentary of the making of a film and an intimate portrait of three of the most famous film stars of all time.

Two hundred of these pictures are reproduced in The Misfits book in rich duotone, including both those images that have become iconic – such as Eve Arnold’s luminescently beautiful studies of Marilyn Monroe in the desert – and those that are rarely seen.

The photographs are accompanied by a 8,000-word essay by the editor-in-chief of the influential French film magazine Cahiers du cinéma, Serge Toubiana, in which he recounts the tragic and triumphant story of the film.

The book also includes an interview between Toubiana and Arthur Miller, who was present during the shooting of the film and appears in many of the photographs. Miller discusses the photographs in the book, revealing the circumstances under which they were taken, as well as offering an insight into origins of the film itself.
ISBN: 0714861073
Publisher: Phaidon Press
Paperback : 192 pages
Language: English
Dimensions: 7.5 x 9.9 x 0.7 inches