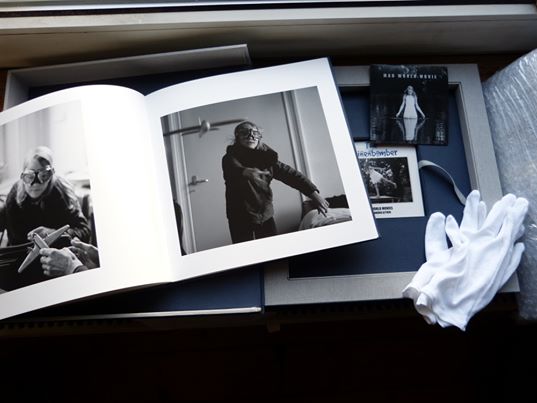 Mad World Movie
by The Rosinenbomber & Anna Ajtner
“MAD WORLD MOVIE started with just one photograph. In summer 2016 we had recorded the song „Mad World“ with The Rosinenbomber. Looking for a cover photo for the CD, I came across that black & white photograph from Anna Ajtner showing her daughter Sandra wearing those old fashioned Halcyon (TM) goggles. It fit very well to the retro sound of the band and that particular song. So I asked Anna for permission to use the photo for the cover, and when the CD was publis- hed, mother and daughter liked it, and so did our fans. After New Year 2017 we spoke with Sandra’s Mama about making a music video together with Sandra where she would play those parts in the song about children, school and dreams. None of us had done such a project before, so one can say it was a „start-up“ for both sides. The script of the movie (as we called the video from now on) was rather rough with a lot of space, and in Febru- ary we started filming the school, birthday and toy plane scenes in Holland. Then followed a se- ries of pictures in the photo studio with the goggles and toy planes, which were to become key elements in the movie. Those photographs were later also featured on and inside the CD sleeve. In April we went to the legendary Can-Studio at Deutsches Rock’n Popmuseum Gronau and filmed the scenes with the band. For Sandra it was the first time she went to a music studio. We did not record anything at that session but had a chance to do some rehearsal together. Anna documented it in the photographs reproduced in this book. Since the original ending of the script with Sandra taking part in a live concert in May was not meant to be, we had to come up with a new ending. So we decided to continue the musical work and went to Fox Music Studios (Germany) in July. This time we not only filmed but actually recor- ded some music. We created vocal overdubs for „Mad World“ as well as „Sad Song“, which was to become Sandra’s debut song. CD and movie were released in October 2017. The CD cover features the photograph „The bird“, taken about the same time the band did the initial recordings in summer 2016. The DVD cover shows „To half“, which was taken summer 2017 right after the end of the production. The idea of a picture book was already there at the very first meeting, but it was not before the end of 2017 that we could actually put it all together. In the exclusive box it now contains the whole project. There are no words for me to express the joy, honor and gratitude I feel about creating this project together with Anna and Sandra. So let this project, which by the way is a true Polish-German cooperation, speak for itself! Share the creativity and good vibes we were to receive in the making of it.” www.the-rosinenbomber.com Karsten Wolff
Publisher: Karsten Wolff