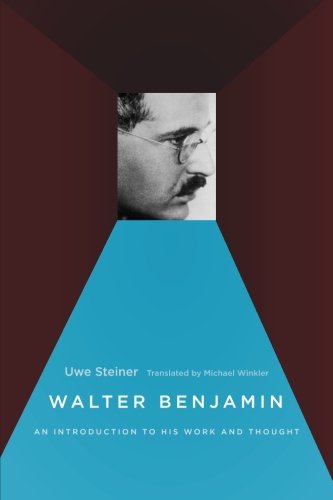 Walter Benjamin: An Introduction to His Work and Thought
by Michael Winkler
Publisher's Description
Seven decades after his death, German Jewish writer, philosopher, and literary critic Walter Benjamin (1892–1940) continues to fascinate and influence. Here Uwe Steiner offers a comprehensive and sophisticated introduction to the oeuvre of this intriguing theorist.

Acknowledged only by a small circle of intellectuals during his lifetime, Benjamin is now a major figure whose work is essential to an understanding of modernity. Steiner traces the development of Benjamin’s thought chronologically through his writings on philosophy, literature, history, politics, the media, art, photography, cinema, technology, and theology. Walter Benjamin reveals the essential coherence of its subject’s thinking while also analyzing the controversial or puzzling facets of Benjamin’s work. That coherence, Steiner contends, can best be appreciated by placing Benjamin in his proper context as a member of the German philosophical tradition and a participant in contemporary intellectual debates.